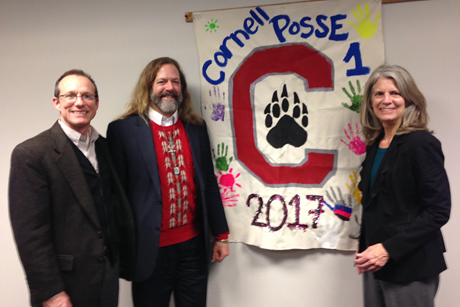 Writing a Cornell application essay isn’t easy, but for students competing for a spot in next year’s Posse cohort, the essay and the rest of the early admission application was just the beginning.

Posse is a college access and youth leadership program that identifies promising high school students who might not otherwise have applied to top-tier colleges and universities; students attend college in multicultural cohorts of 10. The program is administered at Cornell by the College of Arts and Sciences.

The students were given dynamic situations to respond to and solve on the spot, drawing from their personal experiences. For example, in one exercise candidates took turns role-playing college administrators dealing with crises that ranged from a bias incident to a dorm fire. The rest of the applicants played contentious constituents.

And instead of a one-on-one interview with Cornell advising staff, the candidates had to explain – in front of the rest of the group – what they had to offer as Posse scholars, thus proving their ability to speak in public.

The 23 students vying for spots in Cornell’s Posse cohort had already survived an intensive winnowing process. Chicago’s Posse cohort pool started at 2,000, with virtually every high school in Chicago nominating a candidate. By the time Cornell entered the picture, that group had been reduced to about 250 by the Posse Foundation for the 11 colleges that draw from Posse Chicago, in sessions where candidates demonstrated how they coped with competitive pressure. But cutthroat ambition was not what Posse was seeking: to succeed in the exercises, the candidates had to engage in effective teamwork.

“Posse is looking for leadership skills and a particular level of resilience, because those inner resources are what will get them through,” says Miller. “In these competitive exercises their natural tendencies come out, and you can see which of them are not being generous, and which have a natural first inclination to help each other.”

Choosing which among the excellent candidates should make up the cohort wasn’t easy, says Miller, noting that their decisions took into account not only the individual but the cohort as a whole.

The varied backgrounds of the cohort will help make next year’s freshman class “one of the most exciting” at Cornell, says Miller. “Posse provides a benefit for every Cornell student and faculty member who will have these interesting scholars in their classes, an opportunity they wouldn’t have had if not for Posse.”

Gretchen Ritter, the Harold Tanner Dean of the College of Arts and Sciences, agrees. “We see the Posse program as a real asset to the college,” she says.

Once at Cornell, the new cohort will be mentored by faculty adviser Derek Chang, associate professor of history (this year’s cohort’s adviser is Linda Nicholson, professor of molecular biology and genetics). They’ll also receive two years of targeted guidance from Posse program manager Jarrel Johnson, after which they’ll transition to the regular advising system.

“They receive attention similar to the typical advising every student gets, but it’s a little more hands-on,” says Johnson, with special attention given to helping the students take advantage of opportunities at Cornell beyond the classroom, like Cornell Abroad, internships and research projects.

This year’s Posse cohort, Cornell’s first, has been “phenomenally successful” says Johnson, despite the many challenges of adjusting to a non-urban Ivy League school.