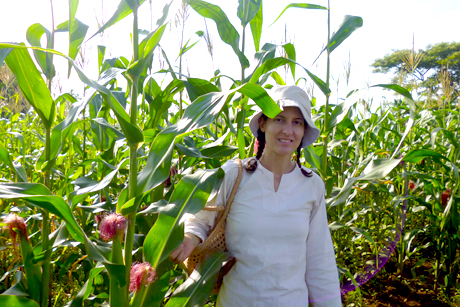 Provided
Ph.D student Leilah Krounbi in a field of maize in Kenya, where she is doing research into the feasibility of using pyrolyzed human waste as fertilizer.

Krounbi, a Ph.D. candidate in the field of crop and soil sciences, has devoted her studies to researching novel methods to increase soil nutrient levels and restore degraded soils.

The use of pyrolysis – thermal combustion in the absence of oxygen – of woody materials to produce biochar has been hailed as a potentially powerful tool to capture carbon and add it back into soils. The transformation of sewage sludge into a “bio oil” for energy has also been studied.

Krounbi wondered if pyrolysis could also be used to turn human waste into fertilizer. So she teamed up with crop and soil sciences professor Johannes Lehmann and joined the Climate Foundation and Sanergy – a latrine project based in Nairobi, Kenya – to answer the Bill & Melinda Gates Foundation’s “Reinvent the Toilet” challenge.

The urea in urine is high in nitrogen, and feces contain a lot of phosphorus – both nutrients that are lacking in many soils. By burning feces at temperatures between 200 degrees C and 500 degrees C, the waste matter could be converted into solid, sanitized biomass. Soaking that biomass in urine, either before or after pyrolysis, would add nitrogen.

Krounbi is trying to figure out the right mix and optimal pyrolysis temperature, while also studying logistics and its effectiveness in the field. There are several challenges to overcome, such as the conversion of nitrogen in urea to ammonia.

“There is a lot to consider as I’m looking at how to take human waste and turn it into something useful,” Krounbi told her peers at a Department of Crop and Soil Sciences seminar Feb. 6.

The impact of Krounbi’s work could be substantial. Maize yields in sub-Saharan Africa are, on average, about a fifth of those in the United States. Current commercial urea fertilizer is expensive – around $4 per pound in Kenya compared to $0.50 per pound in Iowa – and only about half of the nitrogen applied is absorbed properly.

“While serious soil degradation is a problem, it’s not being remedied with inputs,” Krounbi said.

She traveled to Kenya last summer as part of Cornell’s Food Systems and Poverty Reduction IGERT program, and will return this month to continue her research using actual human waste.

In the meantime, her experiments have been fueled by Fido. Krounbi collected dog feces from the SPCA and other sources for her studies.

While her initial findings have been promising, Krounbi said she is looking forward to testing her methods in the field and measuring the results in Kenyan soils and crops.

“The rural dilemma is a dearth of nutrients, including carbon, nitrogen and phosphorus. The urban dilemma is excess nutrients – human waste going to waste,” Krounbi said. “This could provide a way to close the urban-rural nutrient cycle and char away the dilemmas.”

Krounbi’s work is funded in part by the National Science Foundation’s IGERT Poverty Reduction and Food Security grant. The overarching project on pyrolysis of human waste is funded by the Gates Foundation.