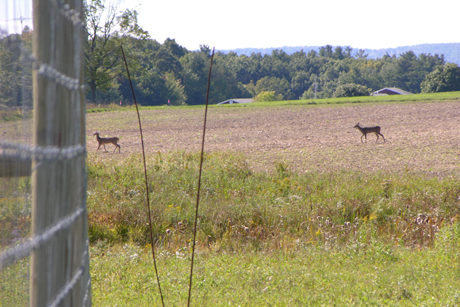 Provided
Deer appear ready to eat leafy, woody plants at Cornell's agricultural plots. The fenced exclosure, set up by Anurag Agrawal, is on the left.

By literally looking below the surface and digging up the dirt, Cornell researchers have discovered that a burgeoning deer population forever alters the progression of a forest’s natural future by creating environmental havoc in the soil and disrupting the soil’s natural seed banks.

The results were published online March 7 in PLOS ONE.

“Deer are slowing down forest succession or natural establishment. In fact, the deer are preventing forests from establishing,” says Anurag Agrawal, Cornell professor of ecology and evolutionary biology, a co-author on the paper.

Deer typically prefer to eat native, woody plants and rebuff invasive species. The study showed that when deer consume native plants, the non-native species are left to flourish, dropping seed in the soil.

As forests normally mature, their grasses give way to herbs and shrubs, and then new trees eventually take root. Expanding deer populations in the Northeast, however, stall forest development, says Agrawal, and promote the growth of thorny thickets of buckthorn, viburnum and multiflora rose bushes. If deer leave the forests alone, such trees as cottonwood, locust and sumac can sprout and grow unimpeded.

The researchers found that the impacts of deer grazing on vegetation were severe and resulted in bare soil and reduced plant biomass, less recruitment of woody species and relatively fewer native species. And the deers’ negative impact on seed banks resulted in significantly decreased overall species richness and relatively more short-lived species of both annual and biennial plants.

Co-author Antonio DiTommaso, Cornell associate professor of weed ecology and management, and research technician Scott Morris gathered soil cores – from both within and outside of fenced “deer exclosures” – and germinated the seed. They found the soil cores from outside of the exclosures contained many more seeds from non-native species.

Deer select forests for their trees but in doing so disrupt forest system growth trajectories, concludes the study.

“It’s obvious that the deer are affecting the above-ground species, but it’s like an iceberg. There are major effects below the soil surface. We are seeing a divergence of seeds contained within the soil from what should be there,” says DiTommaso. “We are not seeing the seeds of woody plants. Instead, we’re seeing an escalation of non-native seed and the virtual elimination of woody plant seeds.”

The multiyear study was conducted on Cornell land near Freese Road in Ithaca, where the deer density is about 39 animals per square kilometer – about 10 times greater than it was before European settlement in the late 1700s.