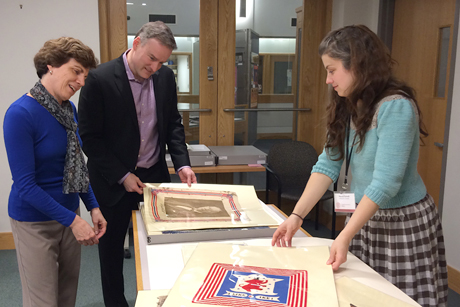 The library’s vast array of manuscripts and artifacts tells thousands of different stories. A newly acquired textile collection – with a strong Cornell connection – of more than 100 items from the latter half of the 19th and the 20th centuries are now part of Cornell’s world-renowned Collection of Political America in the Division of Rare and Manuscript Collections.

The textiles, a donation from the estate of quilter Lucinda Reddington Cawley, include such items such as sashes and fabrics printed with presidential portraits and scarves that were souvenirs from World Fairs.

“This collection represents a tangible form of history,” said Marcie Farwell, special collections assistant at the library. “These are objects that people bought to commemorate certain events they felt were historically significant and of which they were part. They’re relatable in a way that history on the page is not, because they’re objects that remind us that we were there.”

Textiles were a lifelong passion for Cawley, who was also a voracious reader of history and politics, said her son John, professor of policy analysis and management and of economics in the College of Human Ecology. After her death in 2011, her son approached the college’s archivist, Eileen Keating, about donating part of his mother’s collection. 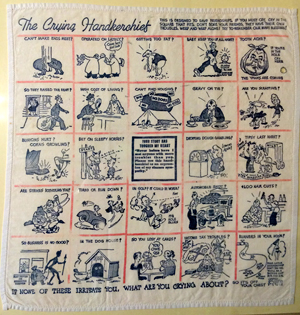 The library digitized the Political Americana collection through a major grant in the early 2000s. The original seed of that collection – the Susan H. Douglas collection – includes a variety of lapel buttons, campaign ribbons, hats and other textiles as well.

“Because there’s already a great political Americana collection here, Cornell is a magnet for people interested in the subject,” John Cawley said. “You want to memorialize the people you love, and the library has given us a wonderful way to do that. Through this, my mother is part of something bigger, and hopefully the collection is something that other people will use and enjoy – the best of all worlds.”

Among his mother’s items are scarves and other textiles that relate to World War I, including handkerchiefs embroidered with Allies’ flags and commemorating towns that were bombed. The textiles, for example, allow researchers to trace the use and development of various fabrics manufactured in different parts of the world. A polyester-knit calendar commemorates the 200th anniversary of the Declaration of Independence. The calendar is an early example of a computer-designed graphic.

“When you compare it to a similar textile from the 100th anniversary, you can see the changes brought by the use of polyester in the second half of the 20th century and the early use of computers in design – and how we try and recreate that nostalgia through reproductions of the older prints,” Farwell said.