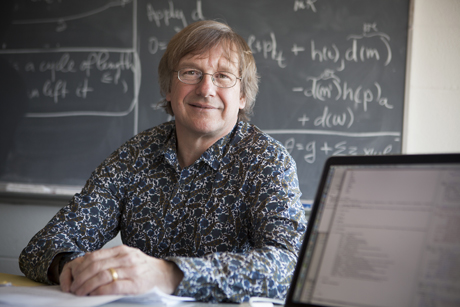 Not all paths lead in a straight line, even – or particularly – in math. In 1983 Michael Stillman was just another graduate student looking for a distraction from the hard work of his dissertation. The zigzag he took became a computer program that has helped transform the understanding and use of polynomial equations by algebraic geometers all over the world.

Polynomials start out simple, just like the equation for a circle: X2 + Y2 = 1. Such equations are easy to represent on a graph. But increase the number of variables and plotting the solution becomes increasingly challenging. What if the variables represent the different temperatures in different parts of an airplane? Or represent all the possible ways a robot’s arm can move to get from Point A to B?

It was once believed that some mathematical abstractions were so complex they couldn’t be computed at all, says Stillman, but his program has turned scoffers into believers. Macaulay (now Macaulay2) makes the abstract concrete and computable by turning the abstractions into matrices and polynomial equations. “This surprised a lot of mathematicians in the late 1980s,” says Stillman, a professor in the College of Arts and Sciences’ mathematics department.

Because the program is open source, which Stillman and Macaulay2 co-author Dan Grayson strongly support, many mathematicians have applied it to their own research, developing packages of their applications that are distributed free with the Macaulay2 system to users. Some have also written tutorials for their undergraduate classes. “We’re at over 100 packages,” Stillman says, adding, “It’s good to see there will be people to hand the reins over to when I retire.”

But Stillman, recipient of a 2013 Stephen and Margery Russell Distinguished Teaching Award, also uses a more old-fashioned tool in his classroom: the blackboard. “If someone flashes a formula on a screen, it’s hard to process,” he explains. “It helps to see it as it’s being written down. And in math it’s easy to miss something that flashes by on a PowerPoint slide.” He also finds that using a blackboard enables him to more quickly adapt the material to what the class needs.

Stillman presents material creatively, teaching the orientation of a surface by jumping up on a table and walking around its edge. “It makes it more visual and fun,” he says.

And for life sciences majors who are sometimes unconvinced that math matters, he offers examples relevant to them, such as the problem cardiologists face in measuring the size of a heart.

Stillman claims he chose math because he had difficulty memorizing things. “Math empowers you to derive things for yourself,” he says. He loves that “aha moment” when students figure out they can do something for themselves. “That ‘aha’ thing is really the best thing that comes from math,” he says.

In his research, Stillman tends to veer away from equations involving infinite dimensions because “too many weird things happen.” He’s more interested in how equations work, but he is exploring some exciting potential equations that relate to string theory.

He’s also collaborating with biologists and statisticians, sometimes applying computational methods to areas of biology that haven’t been done before. “I’d like to find ways to really understand models of cells or infection, and figure out which of various models are good,” he says.

Cornell’s interdisciplinary culture keeps Stillman engaged, he says. “I’ve been really happy with the energy and enthusiasm of everyone, not just in math but in other fields. That’s why I’m still here.”