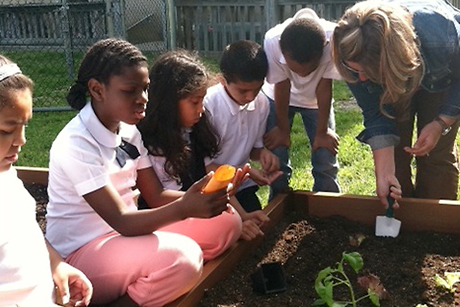 Provided
A new study reports that children in schools with vegetable gardens got 10 minutes more of exercise than before their schools had gardens.

To get schoolchildren moving, uproot them from classrooms into school gardens, concludes a two-year Cornell study of 12 elementary schools in five New York regions.

By experiment’s end, kids at schools with gardens were moderately physically active at school for 10 more minutes a week than before their schools had gardens. That was an increase of four times what peers experienced at gardenless schools. What’s more, children who gardened at school were substantially less sedentary at home and elsewhere than their counterparts.

With nearly one in three American children overweight or obese, school gardens could be a simple, low-cost way to get kids more active, said environmental psychologist Nancy Wells, associate professor of design and environmental analysis in Cornell’s College of Human Ecology. 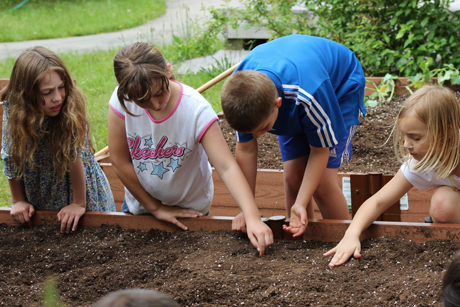 Provided
School gardens could be a simple, low-cost way to get kids more active and fight obesity.

“This is the first true experiment to measure the effects of school gardens on children’s physical activity, and we found a significant increase,” Wells said. “It is notable that in our intervention, kids were only spending an hour or two per week in the gardens, yet there was a significant difference in physical activity. The findings suggest that if schools embraced gardens further and integrated them into lesson plans, there might be an even greater effect.”

Schools in six New York counties (Delaware, Monroe, Rockland, Schenectady, Suffolk and Wayne), working with leaders in the Urban Environment Program at Cornell University Cooperative Extension-New York City, planted gardens as part of the national U.S. Department of Agriculture Healthy Gardens, Healthy Youth project. Wells leads the research for the project, which includes schools in Arkansas, Iowa and Washington and is testing how such gardens influence kids’ preferences for and knowledge and consumption of fruits and vegetables.

Learning in a garden induced children to be “significantly more physically active” compared to an indoor class, said Beth Myers, a doctoral student in the field of design and environmental analysis who assisted with the study. On average, children sat for 84 percent and stood for 10 percent of an indoor class. During garden lessons, kids moved about much more, sitting for only 15 percent of the time, with the majority of their time spent standing, walking and kneeling.

Wells, who has studied how access to nature boosts kids’ mental and physical health, said the findings show that “school gardens are an effective way to begin to nudge kids toward their 60 minutes of daily activity,” a level recommended by the U.S. Department of Health and Human Services and promoted by First Lady Michelle Obama’s national “Let’s Move” campaign.

Given the limited scope of this intervention, Wells said the next step would be to “design ways to make it easy for schools to adopt garden-based lessons” more widely into their curricula.

The study, not yet published, was supported by the Robert Wood Johnson Foundation’s Active Living Research Program, the USDA Food and Nutrition Service and Cornell’s David R. Atkinson Center for a Sustainable Future.