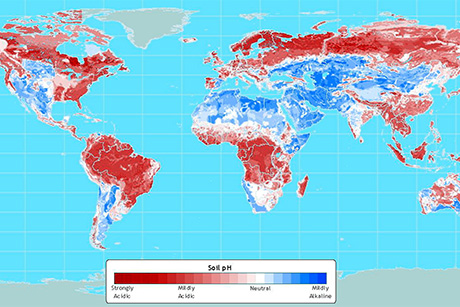 With as much as 40 percent of the world’s potentially arable land unusable due to aluminum toxicity, a solution may be near: Cornell agricultural scientists report that a gene – and the protein it expresses – play a major role in allowing rice to tolerate the toxic metal in acid soils.

Of all the cereal crops, rice is the most aluminum tolerant. In acidic soils, a form of aluminum, the Al3+ ion, is very toxic to plant roots and greatly reduces crop yields. Meanwhile, scientists race to feed the world’s growing populations while arable lands become scarcer.

In a study published in the Proceedings of the National Academies of Science April 11, the researchers explain how the so-called NRAT1 gene in rice expresses a transport protein to move aluminum away from the root cell walls where it creates problems and into the cell, where it is sequestered in a vacuole, where it can’t do any damage.

“This research opens the door for using NRAT1 to improve aluminum tolerance in other cereal crops,” said Leon Kochian, a senior author of the paper and Cornell adjunct professor of plant biology and director of the U.S. Department of Agriculture’s (USDA) Robert W. Holley Center for Agriculture and Health at Cornell. Jian-Yong Li, a postdoctoral researcher at the Boyce Thompson Institute of Plant Sciences at Cornell, is the paper’s first author.

The researchers, including Cornell rice geneticist Susan McCouch, who co-directs this project with Kochian, had previously targeted the NRAT1 gene based on work done in McCouch’s lab to genetically map aluminum tolerance using diverse lines of rice. In this paper, they sequenced the NRAT1 gene from 24 genetically diverse rice lines that were either aluminum-tolerant or sensitive. Based on the resulting DNA sequences, they identified aluminum tolerant- and aluminum-sensitive versions of the NRAT1 gene.

In comparing the tolerant and sensitive NRAT1 genes, they found small but key sequence alterations, which resulted in a tolerant NRAT1 protein that effectively transported aluminum ions from the root cell wall into the cell, preventing aluminum toxicity that occurs in rice due to damage to the cell wall in the growing root tip. They also found sequence differences that led to higher expression of the NRAT1 gene in the tolerant rice lines.

The researchers then inserted the tolerant and sensitive versions of the rice NRAT1 genes into the genome of Arabidopsis plants and found that both versions, but especially the aluminum-tolerant NRAT1 gene, greatly boosted aluminum tolerance in Arabidopsis plants.

These findings suggest this gene can be used to increase the aluminum tolerance of other plant species, which would be beneficial for crop species often grown on acid soils throughout the world.

“We have the potential to confer significant increases in crop acid soil tolerance,” said Kochian. “It could be that some other crop species have related NRAT1 genes that are normally not expressed to very high levels, and possibly we can find ways to turn on these genes or use biotechnology to introduce the rice NRAT1 gene into other crops,” he said.

The study was funded by the USDA Agriculture and Food Research Initiative program.