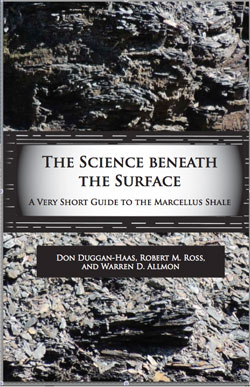 The new book, “Science Beneath the Surface: A Very Short Guide to the Marcellus Shale,” attempts to offer a reader-friendly, unbiased, scientific guide needed to make well-informed decisions regarding energy use and, more specifically, hydraulic fracturing (“fracking”) in the Marcellus Shale.

The 252-page book was published recently by the Paleontological Research Institution (PRI), a Cornell affiliate. It was co-authored by Robert Ross, paleobiologist and associate director of outreach at PRI; Don Duggan-Haas, PRI educational researcher; and Warren Allmon, Cornell professor of paleontology and executive director of PRI/Museum of the Earth. It includes contributions by educators Kelly E. Cronin, Trisha A. Smrecak and Sara Auer Perry.

The Marcellus Shale is a vast rock formation that holds a huge reservoir of natural gas; it is at the center of one of the most controversial natural resources issues of our time, say the authors. This is primarily because of the unconventional method used to extract gas from the shale – slickwater horizontal high-volume hydraulic fracturing, or hydrofracking. Concerns about how widespread use of the practice will affect the natural environment – most especially freshwaters at the local level and climate at the global level – have thrust geology into the public view. This book, funded by National Science Foundation grants, reviews the major science and technology issues around this complex topic, offering impartial, evidence-based, thought-provoking information to help citizens decide what to do.