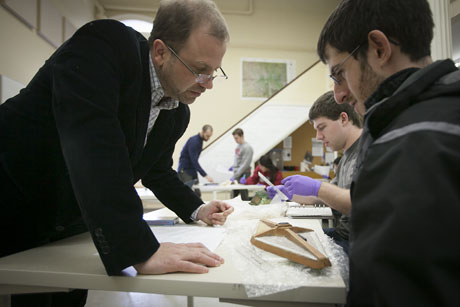 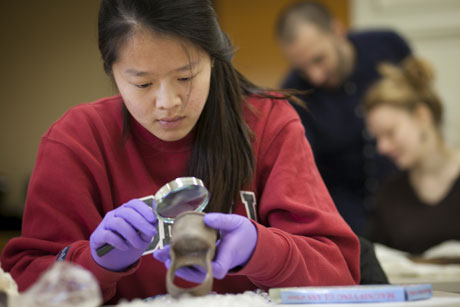 “Welcome to Cornell Ruins National Park,” Adam T. Smith tells his students. “We’re lucky today. We have a cache of objects to examine discovered in the ruins of McGraw Hall.”

This “Rise and Fall of ‘Civilization’” class examines traditional archaeological topics, like kingship and the origins of cities, partly by looking at our current civilization through the lens of a single site – the Cornell campus as it would look 1,000 years from now.

“Archaeology is typically done overseas or on sites far removed from the classroom,” says Smith, professor of anthropology in the College of Arts and Sciences. “The Cornell ruins project brings archaeology to campus. Students can imagine the trash they find accumulating over hundreds of years and slowly being accreted, which is how an archaeological site forms.”

The McGraw Hall “cache” is actually part of the Llhuros Collection, “artifacts” from a mythical civilization created in the 1970s by the late Norman Daly, Cornell professor of art. Working with Daly’s son, David Daly, Smith has brought a selection of Llhuros items to his class in the Landscapes and Objects Laboratory in McGraw Hall.

“Is this real?” a student asks, picking up one of the artifacts, laughing at its Styrofoam base.

But another student becomes so captivated in examining his Llhuros object that he forgets it’s meant to be from Cornell’s future. “I never envisioned myself working with something so old that the context is lost,” he says. “It makes you wonder what will happen to our stuff thousands of years from now.”

His enthusiasm doesn’t surprise Smith. “Archaeology is one of those fields that is just simply so fun to do that it’s kind of intoxicating,” he says. “One thing I love about this course is it reflects the sense of enjoyment that comes with the archaeological enterprise.”

Smith and his graduate assistant Alex Marko guide students in measuring the objects with calipers and using the Munsell soil chart to assign colors. Students can use Norman Daly’s Llhuros catalog for reference, but Smith encourages them to be creative and not feel constrained by the catalog’s author.

“In addition to teaching them the hard work that goes into understanding artifacts, I’m also trying to teach them the imaginative side of archaeology,” says Smith. “They’re being confronted with objects and being asked to figure out how they work or how they fit into a larger social or cultural framework. It’s a real work of archaeological imagination. The students are extremely good at this and are very eager to do it.”

As far as Smith knows, no other class has taken advantage of the Llhuros collection. He and David Daly are exploring possibilities for the curation and preservation of the objects, which in some cases are showing the effects of age – just like true artifacts.

In addition to traditional reading assignments, the course uses the computer game “Civilization” to examine contemporary representations of civilization. The software helps students to understand how the archaeology of ancient civilizations has informed ideas about what shapes and constrains civilization in the present.

“Being forced to compare and contrast the game with real life, I started to think about what can you draw out of the game besides the obvious strategy thoughts, to understand the details that went into the game so it would be a somewhat accurate interpretation of civilization,” says computer science major Jordan Silver ’16.

The last two weeks of class cover the collapse of civilization. Since they’re imagining Cornell’s future, Smith has them examine the way that ecological sustainability and civilizational collapse have become linked in the national conversation.

“It’s a way to get them to think critically about the material world around them that in many ways will shape their future.”

An ancient civilization that never was

The Llhuros Collection represents an entire ancient civilization, including utilitarian and ritual objects, scientific instruments, sculpture, paintings, frescoes and fragments of architectural ruins, and it was all created by the late Norman Daly while he was a professor of art at Cornell.

“I would like the observer, when he is through with the exhibition, to decide that it is not entirely fictitious after all, that it is really another kind of presentation of what we already know, but presented in a slightly different aspect or at a little angle,” said Daly in a 1971 interview.

Combining aspects of conceptual art with a determined attention to traditional aesthetic values, Llhuros came to be recognized as the foundation of “archaeological art,” says David Daly, the artist’s son. The project was exhibited widely in the United States and Germany in 1972-74. Elements of Llhuros were included in a retrospective of Daly's work at the Herbert F. Johnson Museum of Art at Cornell in 2004.

“There’s a great significance to the work itself, and people can relate to it in many ways,” says David Daly.

“Llhuros has great pedagogical value,” adds anthropology professor Adam Smith. “It’s hard in the classroom to present students with the truly unfamiliar, which is really the heart of archaeology. You don’t know what you’re excavating or what you’re going to find, and it’s a work of imagination to piece back together. It’s very hard to recreate that in a classroom lab, but you can with Llhuros.”