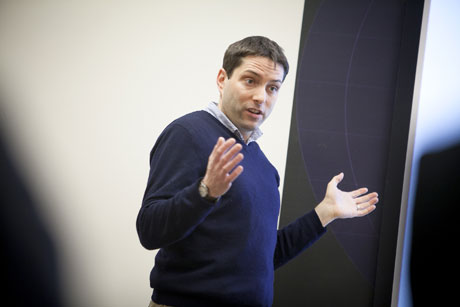 Jim Berry believes that economics can be a force for good. His projects in India use economic studies and principles to uncover the best ways to alleviate poverty and inform policy. His most recent work shows that although government officials in developing countries tout increases in enrollment as a sign of improvements in primary education, test scores show actual learning hasn’t matched this progress.

Berry, assistant professor of economics, began his work in India as part of his dissertation at the Massachusetts Institute of Technology, with MIT’s Jameel Poverty Action Lab, where he is an affiliate. He lived in India from 2002-03 as a research assistant. His research shows that adding a volunteer teacher outside classroom time or offering teacher training and supervision can make a substantial difference in a child’s learning.For his current research project, Berry considered the many challenges India faced in its educational system: lack of classroom furniture and materials, automatic grade promotion, low parental involvement and poorly trained teachers.

Since past research had shown little educational improvement from infrastructure changes, Berry focused on changing curricula, teacher training and evaluating reforms – originally devised by education-focused nongovernmental organizations – that he and his co-authors call “teaching at the right level.” The method encourages teachers to split classes into smaller groups based on ability and use targeted materials and methods to teach students at their individual level.

Berry conducted randomized evaluations in four rural regions of India. Students were tested before and after each intervention and results were clear: Those in schools with outside volunteers saw a statistically significant increase in test scores, and those who received new materials and were taught by a trained teacher with supervision saw even greater gains.

“We found that you can’t just change the curriculum at the top and expect teachers to be trained and to follow through,” Berry said. “But with additional training and teacher monitoring, we saw higher test scores across all levels.”

Costs of the interventions were minimal, Berry said. Materials were not expensive and teacher monitors already exist in Indian schools, they just needed to be refocused. Local nongovernmental staff members could provide teacher training at a low cost, he said.

“Even with these strong results, the question is still ‘will the government buy in?’“ Berry said. In one region in India, the government chose to expand a different program that had national government backing, even through Berry had tested that program and found it didn’t perform as well as his. In another region, the teaching-at-the-right-level approach is being implemented.

“Evidence-based policymaking is always our goal,” Berry said. “But in a lot of contexts it doesn’t happen. For example, in the U.S., you see a lot of very effective interventions (e.g., universal pre-K) that don’t get scaled up for political reasons.”

Berry said his group of researchers will replicate the study in other countries. He believes the methods provide a promising approach for other developing countries where learning in schools is lagging.

Berry presented his research in March at a lecture sponsored by the South Asia Program of the Mario Einaudi Center for International Studies. He also presented results from his work in January at Hobart and William Smith Colleges. Berry’s co-authors come from Harvard, MIT and ASER Centre/Pratham, an organization working to educate underprivileged children in India.