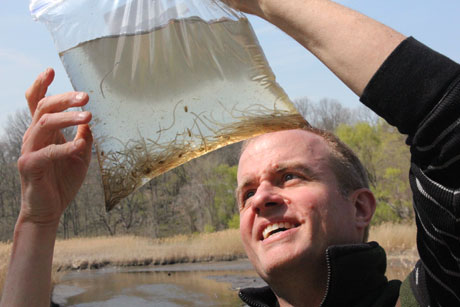 Provided
Chris Bowser holds up a freshly caught bag of "glass eels" at Furnace Brook in Westchester County, N.Y. The young eels are born in the ocean, migrate to freshwater tributaries and then as adults migrate back to the ocean. 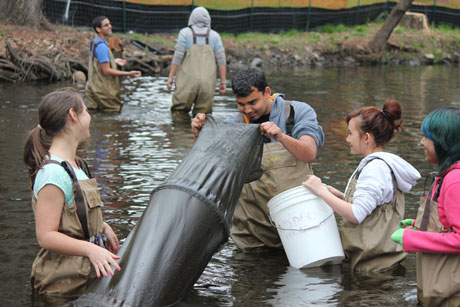 Provided
High school and college students don their waders at a creek in Fishkill, N.Y., to collect young "glass eels."

“Chris has not only contributed to our scientific knowledge of eels and helped educate community members about eels, but through his citizen science eel project, he has fostered community engagement,” said Susan Riha, Cornell’s Charles L. Pack Professor in Earth and Atmospheric Sciences and director of the New York State Water Resources Institute. “This is important to all of us who want to cultivate better participation and a greater public understanding of water resource management issues.”

American eels (Anguilla rostrata), a species in decline due to many environmental pressures, migrate from the Atlantic Ocean and enter freshwater estuaries including the Hudson River. These so-called tiny “glass eels” are a key component of the river ecosystem.

Eel numbers have been on the rise recently: In 2012, volunteers caught an average of 144 glass eels per day, and in 2013 they caught an average of 199 glass eels daily. “This is a significant increase from previous years during which the average catch per day was around 20 to 30 eels,” Bowser said. “But we really don’t know why, and we can’t say if this is a trend or just a few good years.”

Bowser says that in 2013, more than 500 volunteers monitored 10 sites from New York City to Greene County, and more than 100,000 glass eels were caught. To give them access to better habitat, most of these eels were released above dams and barriers, Bowser said.

Like the proverbial canary in the coalmine, eels are a good way to measure water system health. “Eels are a great connector for all of New York’s waterways since they rely on the whole system, from small headwater streams and neighborhood creeks to big rivers and coastal estuaries,” Bowser said.