Scientists are trained to resist applying meticulous, tedious, detailed animal research to human behavior. So an April 10 briefing with journalists in Manhattan – several of whom have traveled to Africa or the Arctic Circle for reporting – drew heightened interest and incessant questions.

Peter H. Wrege, director of the Elephant Listening Project (ELP), satisfied their curiosity. ELP is part of the bioacoustics research program at Cornell Lab of Ornithology.

Reporters left understanding that the forest elephant is increasingly becoming an endangered species in central Africa, but that it’s not too late. “There is plenty of reasons to not have much hope,’’ Wrege said. “But there’s still a chance.”

Wrege rolled out compelling audio and telling video, captured by equipment left operating in the central African rainforest for up to six months at a time. His latest trip, from which he returned last month, used thermal imaging for the first time, catching graphic footage of elephants’ breeding behavior. 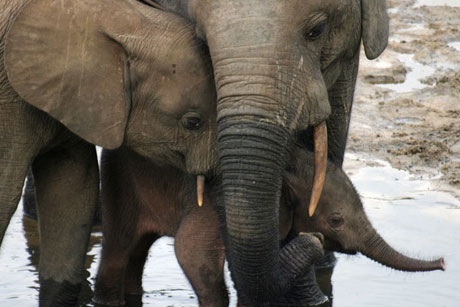 Lab of Ornithology
Elephants use a variety of calls to express emotion, keep in touch, and pass on other information. ELP discovered that some calls are too low for humans to hear.

ELP’s findings on the forest elephant, a third species of the mighty mammals that live as long as 60 years, have documented:

Researchers literally are racing ecological, world development and global warming clocks. Historically, central Africa harbored an estimated 1 million forest elephants. Surveys found the total had dropped to 500,000 by 1993. It’s down to 100,000 today, as an average of 100 elephants are being killed daily, according to estimates by Wrege and others. The forest elephant is “bearing the brunt of ivory pressure,’’ Wrege said, yet it has “the best shot of living a normal, evolved lifestyle.”

“I would not say I’m optimistic,’’ Wrege said. “Of all the elephants, [forest elephants] have the best chance. The hurdles are huge … [but] it’s not like there’s no rainforest left.”

Wrege studied birds and bees for 20 years before inheriting the elephant-sized project from founder Katy Payne in 2007. He typically travels to Africa three times a year and honed his early research skills studying falcons in Colorado.

Wrege also revealed the downsides to gathering 300,000 hours of forest research and 30,000 hours containing elephant calls: It can take years to review it before discovering the dramatic nuggets that make scientific breakthroughs, inform interested animal lovers, or attract private or federal funding to pay for trips and costly equipment. It's otherwise a volunteer effort involving undergraduates, retirees and high school students.

Jon Craig ’80 is a journalist based in Westchester County, N.Y.