In the 1930s the Dust Bowl ravaged the Great Plains, sending clouds of black dust into the sky and displacing tens of thousands of families. This disaster was due in part from the failure to use farming methods that would have prevented catastrophic erosion, said a renowned international voice for sustainable land development.

“One of my favorite quotes about soil is that of President F.D. Roosevelt, that ‘a nation that destroys its soil, destroys itself,” said Luc Gnacadja, delivering “Grounding Human Security: Land and Soil in the Global Sustainability Agenda,” the Jill and Ken Iscol Distinguished Environmental Lecture, at Cornell April 22.

Gnacadja, former executive secretary of the United Nations Convention to Combat Desertification, said he hopes we won’t forget the lessons learned from the ’30s. Yet careless plowing of soil and other unsustainable practices currently cause severe land degradation. An estimated 30 percent of global forest cover has been entirely cleared and a further 20 percent degraded, he said. Increasingly, inferior land combined with population growth means the world will need additional cropland the size of Brazil, the largest country in the Southern Hemisphere, by 2050, Gnacadja estimated.

“In the middle of the 19th century, the French globalist [François-René de] Chateaubriand wrote, ‘Forests precede civilizations, and deserts follow them,’ highlighting that mankind is a desert-making species,” he added. 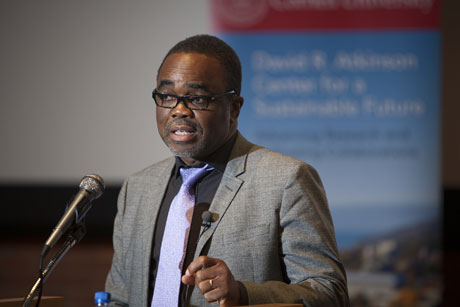 Furthermore, he noted that in certain areas, agricultural practices are causing soil to erode almost 100 times faster than the rate at which soil can naturally regenerate. Land degradation contributes to extreme poverty, food insecurity and hunger, deforestation, environmentally induced migration, water stress and more. More than eight out of 10 violent conflicts around the world occur, he said, in an area of dry land.

“In other words, land degradation is about the depletion of the resources based for ensuring human security and resilience,” he said. “[And] security means freedom from fear, freedom from want and freedom to live in dignity.”

Yet, there is hope, he said. For example, land restoration efforts have recently been undertaken in southern Niger. This has led to the regeneration of 5 million hectares of land and 200 million trees there, alone.

“[There are now] more people, more trees, [and] more livestock in a more food-secure and resilient community. It’s possible, and it’s happening in that region,” he said, adding that a woman there told him, “‘10 years back I had to walk half a day to fetch water. Because of what we have been doing in the last decade, now we have water available on our own site, here.’”

“Enhancing soil anywhere enhances life everywhere,” said Gnacadja, continuing with a Vedic Sanskrit scripture quote from 1500 B.C.: “Upon this handful of soil our survival depends. Husband it and it will grow our food, our fuel, and our shelter and surround us with beauty. Abuse it and the soil will collapse and die, taking humanity with it.”

Concluding, Gnacadja said, “As human beings we often forget … and sometimes we forgive, however … nature never forgets nor forgives.”

This event was hosted by the Atkinson Center for a Sustainable Future.