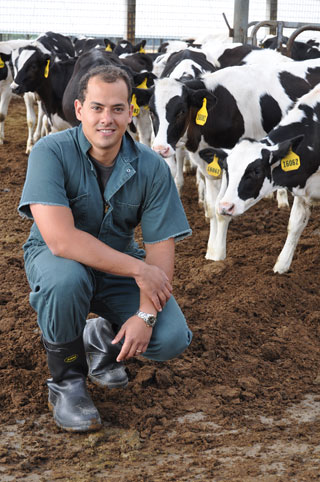 University Photography
Dr. Rodrigo Bicalho, assistant professor of dairy production medicine at the College of Veterinary Medicine, created three vaccines in his lab that lower metritis incidence and symptoms in cows, showing promise for alternatives to antibiotics in addressing the disease.

Cornell scientists have created the first vaccines that can prevent metritis, one of the most common cattle diseases. The infection not only harms animals and farmers’ profits, but also drives more systemic antibiotic use on dairy farms than any other disease.

The new vaccines prevent metritis infection of the uterus from taking hold and reduce symptoms when it does, a prospect that could save the United States billions of dollars a year and help curb the growing epidemic of antibiotic resistance. The research was published in the journal PLOS One March 17.

Metritis develops after a cow gives birth, when bacteria take advantage of the open vagina and cervix to settle in the uterus. Infected cows suffer fever, pain, inflammation, lack of appetite, depression and reduced reproductive abilities. Metritis affects as many as 25 percent of the roughly 9 million dairy cows in the United States, costing nearly $400 per case in lost productivity and treatment costs.

It is the number one cause of systemic antibiotic use, which floods the whole body with antibiotics rather than just a specific region, said Dr. Rodrigo Bicalho, assistant professor of dairy production medicine at the College of Veterinary Medicine. Three of the vaccines Bicalho’s lab created lowered metritis incidence and lessened its symptoms in the cows that received them, showing promise for alternatives to antibiotics in addressing the disease.

“Our lab has been developing a vaccine for years now based on our research of this disease,” said Bicalho. “We created multivalent vaccines, complex cocktails with several components we’ve identified as important to causing metritis.”

Bicalho and his lab researchers tested five combinations of various ingredients and delivered three subcutaneously via a shot and two intravaginally. All three subcutaneous vaccines were effective, significantly reducing incidence of disease by up to 83 percent. Cows that were vaccinated with the subcutaneous vaccines had lower incidence of postpartum fever and puerperal metritis, shorter disease periods and improved reproductive performance compared to those that did not receive the vaccines.

“The powerful protection these vaccines produced surprised us. We expected some protective effect but nothing as strong as what we found,” said Bicalho. “An effective vaccine against uterine diseases will have a significant positive impact on the dairy industry, limiting the use of antibiotics, and decreasing economic losses due to these disorders. Our next step is to simplify the complex vaccines we created by identifying which components are the most important and removing the rest.”

Bicalho’s lab, in collaboration with Merck Animal Health, is working to move the vaccines toward U.S. Department of Agriculture licensing, after which they should be made available for use. The research for the paper, “Subcutaneous Immunization With Inactivated Bacterial Components and Purified Protein of Escherichia coli, Fusobacterium necrophorum and Trueperella pyogenes Prevents Puerperal Metritis in Holstein Dairy Cows,” was funded by Merck Animal Health.