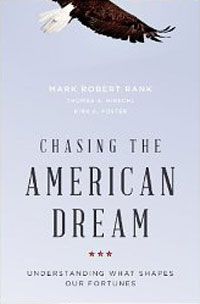 The headline from “Chasing the American Dream: Understanding What Shapes Our Fortunes” (Oxford University Press) – the surprising statistic cited by Barack Obama in a speech about economic mobility – is not the most astonishing thing about the new book, co-authored by Cornell’s Thomas A. Hirschl; Mark Robert Rank, Washington University in St. Louis; and Kirk A. Foster, University of South Carolina.

President Obama said, “… more than half of Americans will experience poverty at some point during their adult lives.” More precisely, according to Hirschl, professor of development sociology in the College of Agriculture and Life Science, 54 percent of Americans become poor or near poor between ages of 25 and 60.

More surprising, in a book filled with grim statistics and disillusionment, are hope-filled stories from people with every right to think the American Dream is past history – but are still holding on because they’re almost living it.

Like the homeless black teenager who told the authors, “I feel like the American Dream is making things that’s [sic] impossible, possible.” He’s working on his high school equivalency diploma, for starters.

Or the minor league baseball player who planned to keep at it “until my body can’t take it anymore.” The Crown City Kings catcher told the researchers, ”You have to have that want to be better.”

They have a dream

“… go on with the determination to make America the truly great America that it is called to be,” Martin Luther King Jr. urged, a week before he was assassinated in 1968. “The place I love best is a sweet memory,” Bob Dylan sang in 2004.

The authors state their vision of the American Dream in 2014: that all Americans “should have the opportunity and freedom to pursue their interests and capabilities in order to attempt to reach their potential;” that “hard work should lead to economic security for oneself and one’s family;” and that “experiencing progress and having optimism within one’s life and the lives of one’s loved ones is an important part of a meaningful life.”

Conducting focus groups across the country and interviewing more than 70 citizens who were chasing the American Dream, the authors never revealed their pessimistic prediction: “The numbers of the poor and economically vulnerable will simply continue to grow in the future. Equality of opportunity will be nothing more than an empty slogan, and democracy will simply be hostage to those with the biggest wallets.”

… unless things change, the authors hope, pointing to what they call a virtuous cycle: Pathways to the American Dream need to widen to accommodate more people, they write. “By investing in all of our people, we begin to create what is known as a virtuous cycle. By strengthening the human capital and skills of our population, we allow more individuals to reach their capabilities and potential.”

Hirschl recalls his excitement, late last year, when the White House asked for an advance peek at the book. Presidential staffers checked and rechecked the statistics (credited in the book to sources like the Panel Study of Income Dynamics, the American Panel Survey and the Current Population Survey). And then, there it was, in a Dec. 4, 2013, policy speech: “If we refocus our energies on building an economy that grows for everybody…” the president went on to say.

Now that “Chasing the American Dream” is officially published, maybe the president can return to read the life stories of optimistic Americans who have been saying that all along.