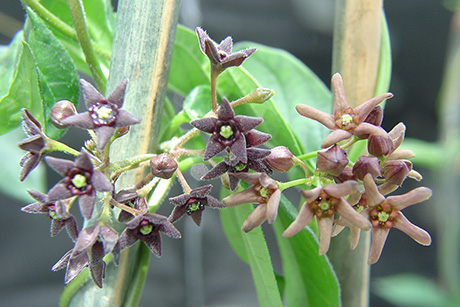 Jeromy Biazzo/USDA
Flowering black swallow-wort (left) and pale swallow-wort (right). The flowers have spread across the Northeast U.S. and Southeast Canada and are appearing further west. 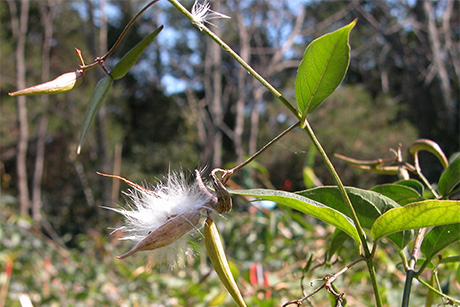 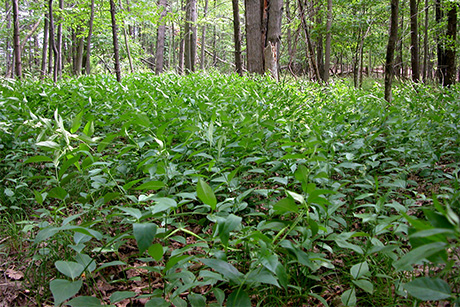 Larissa Smith
This photo shows a monoculture of pale swallow-wort that overtook this forest floor.

When Antonio DiTommaso, a Cornell weed ecologist, first spotted pale swallow-wort in 2001, he was puzzled by it. Soon he noticed many Cornell old-field edges were overrun with the weedy vines. At Grenadier Island near Watertown, N.Y., pale swallow-wort had choked out desirable plant species on hundreds of acres. He thought: “Oh my God, this is serious.”

Pale and black swallow-wort, in the periwinkle family and kin to milkweed, have thrived in the last 20 years across the northeastern United States and southeastern Canada. The plants, probably introduced as ornamentals from Europe to the United States in the 1800s, may have benefitted from the loss of dairy farms in New York state, where cows once stomped them out. Swallow-worts have land managers nervous from sightings in the Midwest. In their preferred habitats – abandoned farm fields with limestone bedrock – pale swallow-wort vines dominate, crowding out other plants. At the same time, they are highly adaptive to less ideal locales.

The vines have lowered land values, harmed Christmas tree farms, and overtaken forests and pastures. Farmers and scientists worry that if it gets into hay, it could sicken livestock.

Ecologically, pale and black swallow-wort species are affecting biodiversity in the northeastern  United States, with pale swallow-wort posing a greater risk, DiTommaso said. The invasive vines threaten plant and animal habitats; there is special concern for such rare plant communities as New York’s limestone alvar areas, which comprise an assortment of native plants and animals. Swallow-worts also threaten monarch butterflies by crowding out milkweed where the butterflies lay eggs and their larvae feed. Monarchs lay eggs on swallow-worts about 20 percent of the time, leading to larval death.

Pale swallow-wort also finds refuge in forested areas, where it spreads when trees fall and let light enter through the canopy.

“Often invasive plants have a few characteristics that make them successful, but pale swallow-wort has most of them,” said Todd Bittner, director of Cornell Plantations’ Natural Areas program. Pale swallow-wort has conquered almost half the landscape at Plantations’ 84-acre Edwards Lake Cliffs Preserve in Lansing, N.Y., threatening rare local plants and habitats.

‘Feathery filaments that ride the wind’

“We’ve learned a lot about their biology in the last 10 years,” said DiTommaso, adding that about 50 scientific papers on swallow-wort have been published during that time, about half of which came from Cornell. Authors of those Cornell studies include DiTommaso, colleagues in the Weed Ecology & Management Lab, and research entomologist Lindsey Milbrath and others at the U.S. Department of Agriculture’s Robert Holley Center for Agriculture and Health at Cornell.

Swallow-wort has no natural enemies in North America; even deer don’t eat it. Each swallow-wort plant produces hundreds of seeds from pods; the seeds are dispersed far and wide thanks to feathery filaments that ride the winds, or attach to deer hides, just like milkweeds. Swallow-wort not only reproduces by seeds that stay viable for three to five years in soils, but it also increases in stem number over time supported by a massive root system.

These root systems release chemicals that may alter the soil and may help cultivate soil fungi that benefit swallow-worts but deter other plants.

In the black swallow-wort’s native Mediterranean and its pale sister’s Ukrainian home, neither plant is rampant. This could be due to natural insect predators, said Milbrath, who has studied a small Ukrainian moth, Hypena opulenta, whose larvae eat swallow-wort leaves. University of Rhode Island scientists screened the moth and released it last fall in Ottawa in collaboration with Canadian scientists.

In the United States, Milbrath and others await federal permission to file for state release permits. “That could be three years, and that’s a guess, before we could even release it here,” he said.

Based on the original collection sites, H. opulenta may prefer shaded areas, but only field studies will verify the moth’s effectiveness in open fields, Milbrath said.

A few years ago, after a swallow-wort population was infested by a fungal pathogen near Rochester, N.Y., Holley Center plant physiologist Donna Gibson identified the pathogen (Sclerotium rolfsii) with assistance from Cornell’s plant diagnostic clinic and others. The fungus killed 70 to 100 percent of swallow-wort seedlings in initial tests. Unfortunately, the pathogen kills indiscriminately, including milkweed. “It might have some use in limited places,” said Milbrath.

But in open field settings, researchers have few options to control swallow-worts. “There are no biological controls that are going to be available for that,” unless the moth ultimately proves effective there, Milbrath said.

Across Plantations’ natural areas, small populations are controlled by hand-digging the roots. For larger populations, Bittner and colleagues clip or intensively mow and spray carefully with herbicides. Mowing must be frequent, as cutting just twice a summer increased pale swallow-wort cover by 300 percent, said DiTommaso.

In gardens, the best strategy is to dig up the big root mass. “Don’t put it in the compost,” and don’t burn it because it could release toxic chemicals; seal it in black plastic bags and leave it in the sun, DiTommaso said.

“We are not going to eradicate the species, but in sensitive areas we can at least minimize its impact,” he concluded.