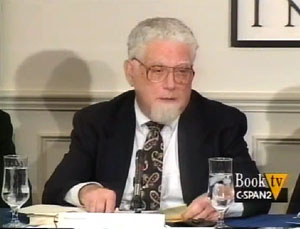 Provided
Werner Dannhauser in a CSPAN panel discussing Saul Bellows' novel "Ravelstein," in which a character is purportedly based on Dannhauser.

Werner Dannhauser, professor emeritus of government described by colleagues as “a deeply serious intellectual and life-loving party animal,” died April 26 in Frederick, Pa., at the age of 84.

Born in Buchau, Germany, May 1, 1929, Dannhauser came to America as a refugee from Nazi Germany at the age of 9. He earned his Ph.D. at the University of Chicago under the legendary Leo Strauss, who applied religion and philosophy to political thought. He worked as a writer and editor at Commentary magazine before coming to Cornell to teach political philosophy in a faculty that included Allan Bloom and Walter Berns, who likewise had studied under Strauss. They attracted a devoted following of graduate students including Robert Kraynak ’71, who later taught at Cornell, and Arthur Melzer ’71, a professor at Michigan State. These two published “Reason, Faith and Politics: Essays in Honor of Werner J. Dannhauser” (2008).

Dannhauser, who was widowed young and raised his two young children by himself, wrote “Nietzsche’s View of Socrates” (1974) and co-edited “On Jews and Judaism in Crisis: Selected Essays” (1987). He is also famous for his 1975 essay, “On Teaching Politics Today.”

He will be remembered by some for the controversy he aroused in the editorial pages of The Cornell Daily Sun by saying in a lecture: “Making women entirely equal runs into resistance of nature because women are patently different from men. I’m not sure that women are inferior, or equal, or superior. I’m arguing for openness on the question.”

Colleagues have suggested that he was the basis for a character in Saul Bellows’ novel “Ravelstein,” described as “a white-bearded professor of philosophy with a transplanted heart and predilections for both gambling and women.” In a TV appearance, Dannhauser declined to reject the description, saying it might be good for his reputation.

He retired from Cornell in 1992 but continued to teach as an adjunct professor at Michigan State. He was predeceased by his wife, Shoshana, and is survived by two children and several grandchildren. Services were held April 29.