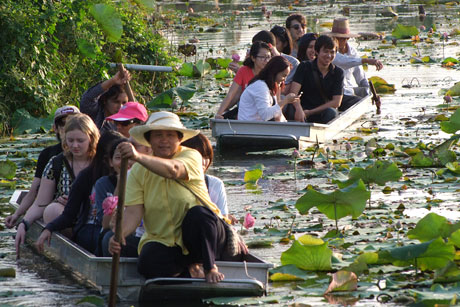 Jarinee Iochawna
Students learn firsthand about social dimensions of water resource management in Thailand during a January trip to Bangkok.

In September 2011, remnants of a tropical storm dropped 12 inches of rain in one day on New York’s Southern Tier, flooding the cities of Owego, Binghamton and surrounding areas, to the toll of an estimated $500 million in property damage. On the other side of the world, Thailand was in the midst of one of the worst monsoon seasons in recorded history, which resulted in 815 deaths and $45 billion in damage.

Shorna Allred, associate professor of natural resources in the College of Agriculture and Life Sciences (CALS), wondered what lessons could be learned from the responses to these two natural disasters. She studies the social dimensions of natural resource management, and much of her research focuses on flooding.

“Flooding is obviously a biophysical phenomenon – some areas are flood-prone – but it can be exacerbated, and alleviated, by things we do as humans,” Allred said. “Is there something we in New York could learn from Thailand’s experience, and is there anything in our experience that we could share with them?”

To explore the idea, Allred developed a unique yearlong course. In a preparatory class in fall 2013, Allred’s nine students learned about water governance issues in Thailand and flood response in Owego. During winter break, they spent three weeks in Thailand on a trip led by Allred and Amy Kuo Somchanhmavong, associate director of service learning at Cornell’s Public Service Center.

The Cornell students worked in two project teams with 10 peers from Mahidol University.

One team worked with farmers on the outskirts of Bangkok to assess the flooding’s impact on agrotourism. They also explored governance, including a controversial decision to intentionally flood suburbs and farms to protect a downtown business district and subsequent reimbursement schemes. They will develop, among other things, a policy brief about the economic and cultural importance of agrotourism near Bangkok, with the hope that it will help farmers gain influence in future discussions about flooding and recovery.

The other team worked with community organizations to learn about the devastation of flooding near the Bang Luang market and to document the resilience of area residents. The traditional market not only contains 100-year-old wooden townhouses and Buddhist holy sites, it is the economic heart of its community. And the community worked with the government to protect it during the 2011 flooding, even at the expense of losing their own homes.

“Even though people’s homes were flooded, almost everyone we talked to supported that decision,” said Sam Ritholtz ’14, a CALS international agriculture and rural development student. “At least they were able to continue working and have incomes.”

They write a report based on their research, which found the community wants to help others learn about strategies to promote flood resiliency.

“We chose that case study because it was a good example of a community coming together to be more resilient,” Allred said. “The community was really grateful that the students were able to document what happened, because they have no real historical record of how they coped with the flood.”