Micah Cormier
Professor Karl Siebert describes the effect of lipid transfer protein No. 1 on the look, taste and foam production of beer.

It’s an unlikely beer-drinking toast: “Here’s to El-Tee-Pee-Won!” Yet, the secret to optimal foam in the head of a freshly poured brew, according to Cornell food science research, is just the right amount and kind of barley lipid transfer protein No. 1, aka LTP1.

Bitter compounds found in hops, like iso-alpha acids, are important to brewers, says Cornell’s Karl J. Siebert, principal investigator and author of “Recent Discoveries in Beer Foam,” set for publication in next issue of the Journal of the American Society of Brewing Chemists.

“Dissolved gases in the beer – carbon dioxide and, in some instances, nitrogen – play a role. So do acidity, some ions, ethanol levels, viscosity and numerous other factors that have been tried by brewers and scientifically tested,” says Siebert, professor of food science and technology at the New York State Agricultural Experiment Station in Geneva, N.Y. “But LTP1 is the key to perfect beer foam.” 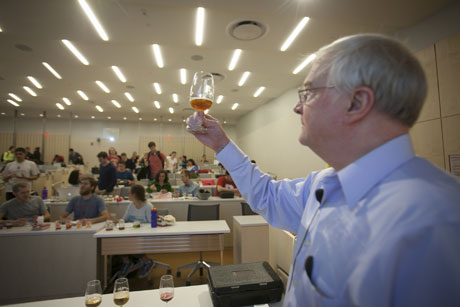 Jason Koski/University Photography
Plenty of chemistry, microbiology and a little taste of beer are on tap for FDSC 4300, The Science and Technology of Beer, taught by Cornell's Karl Siebert.

Fascinating as foam is to chemists, it’s of vital importance for the sensory experience of beer appreciation, insists Siebert, formerly a longtime research chemist in the industry (including at the former Stroh Brewery Co. in Detroit).

“To some beer aficionados, the sign of a good head – the proper consistency, color, height, duration – is to draw a face with your finger in the foam, before taking the first sip,” the food scientist notes. “If the face is still there, when the glass is drained and the liquid is gone – that’s seriously good foam.”

His decidedly unfrothy monograph about foam is filled with scientific detail best understood by Ph.D.-holding chemists – and also by Cornell undergraduates who struggled and savored through the first half of his College of Agriculture and Life Sciences (CALS) course FDSC 4300, The Science and Technology of Beer.

CALS’ answer to the more famous wines course in the School of Hotel Administration, FDSC 4300 devotes one class session apiece to things like the brewing process, barley and malt, hops, brewing water and adjuncts, yeast and fermentation, and finishing – all before spring break.

“The course was oversubscribed, until a few students dropped out in the first couple weeks,” Siebert recalls. “They came to realize there’s a lot of chemistry and microbiology, that they will be tested on the science, and it’s not all about beer drinking.”

As Siebert lectures about “Sensory Perception of Beer” in week nine – still lots of not-so-basic chemistry, discussion of astringency vs. smoothness and a guided tour of human taste buds – TAs pass through 146 Stocking Hall, pouring samples into the four glasses in front of each note-taking student.

In four different colors, there’s a lager, an amber, a nearly black stout and a very light liquid that smells oddly fruity.

“Sniff each one first,” Siebert instructs. “Remember what we said about the interplay of your senses.”

The students (many of them seniors in engineering, Siebert marvels later) swirl and sniff. They share impressions – not all entirely appreciative – with classmates on either side.

“All right, go ahead and taste,” the professor says, as the PowerPoint slide reveals the brands behind samples A, B, C and D.

That fruited one is Belgian, with a distinctive dash of apple. “We don’t usually think of apple and beer in the same place – but what’s important is what you sense,” Siebert concludes.

FDSC 4300 students pack up their sampling glasses, books and laptops. In the front of the room, TAs are handing out graded exams. With real-life chemistry and microbiology mingling amongst their taste buds, they’re about to learn how much science and technology they’ve absorbed from the master researcher of beer foam.