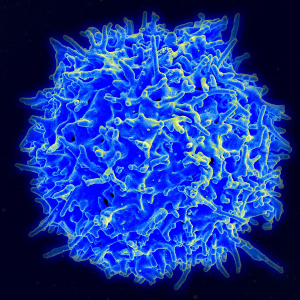 NIAID
Scanning electron micrograph of a human T lymphocyte (also called a T cell) from the immune system of a healthy donor.

“Forgetful” immune systems leave infants particularly prone to infections, claims a new Cornell study. Upending the common theory that weak immune cells are to blame, the study has found that infants’ immune systems in mice actually respond to infection with more speed and strength than adults. Yet the immunities they create fail to last.

Published in the Journal of Immunology in May, the discovery suggests a new angle immunizations could take  to better protect infants and children from infectious diseases.

“The perfect vaccine would be a single dose given at birth that generates long-lasting immunity,” said immunologist Brian Rudd at the College of Veterinary Medicine, the study’s lead author. “No such vaccine exists because we haven’t understood why infants rapidly lose immunities. Our finding could change the way we immunize infants and ultimately lead to more effective ways of enhancing immunity in early life.”

“Surprisingly, we found that newborns’ cells actually responded more vigorously to infection compared to adults,” said Rudd, assistant professor of immunology. “We also found that newborns’ cells go through their lifespans more quickly and die off sooner, before they can give rise to memory T cells and remember what they’ve learned. So the immune system is forced to start the learning process over again when infected by the same pathogen later in life.”

“We hope to find a way to make neonatal cells behave more like adult cells in how they learn from vaccines and respond to infection,” said Rudd. “Knowledge gained from these studies could be used to design more effective therapeutic interventions and vaccines that can be safely administered in early life.”

This work was supported by National Institutes of Health, the Cornell Center for Vertebrate Genomics and a National Science Foundation Graduate Research Fellowship.

Carly Hodes ’10, MBA ’15, is a communication specialist at the College of Veterinary Medicine.