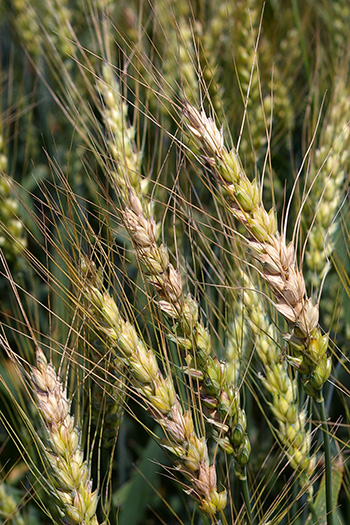 Gary Bergstrom/Cornell
Damaged by Fusarium head blight, many wheat spikelets are prematurely bleached, while others on the same plant remain green.

To protect wheat for bread and barley for beer, Cornell plant pathologists have been evaluating ways to battle fungal blight. Recently the scientists found that a local fungal strain is no longer controlled by a key fungicide. Their findings provide warning to farmers, who can, however, surmount field problems with sound pest management practices.

Bergstrom explains that judiciously applying a family of fungicides called triazoles - of which tebuconazole is a member - when the crop flowers will continue as a successful crop management strategy. However, he cautions that multiple applications of the same fungicide at different crop stages and over wide geographic areas pose a risk for eventual resistance in fungal populations.

All agriculturists involved in North American cereal production should realize that decreased effectiveness of important head-blight control fungicides could occur if these materials are not managed carefully to reduce the selection pressure on Fusarium head blight fungus populations, Bergstrom said. We hope our findings will spur more routine screening of Fusarium populations. That way producers can put into place resistance-management strategies that prevent failures in the future.

The research was supported by funds from the U.S. Department of Agriculture, National Institute of Food and Agriculture to the Cornell Agricultural Experiment Station. The research was published in the May issue of the international journal Plant Disease, along with a question-and-answer supplement.