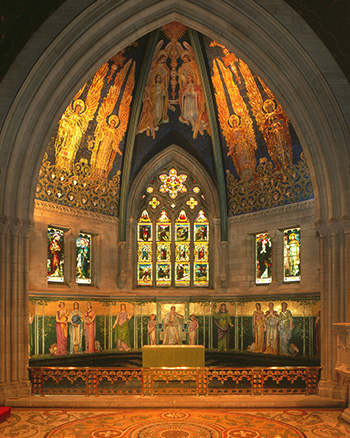 Robert Barker/University Photography
The apse at Sage Chapel, May 2014.

The stained glass murals of the apse in Sage Chapel glow with a subdued light and rainbow tones. The ambience draws visitors from off campus, returning alumni, concert-goers, wedding parties, ecumenical service participants and members of the Cornell community who just want to spend a moment in quiet reflection.

But get up close, and the light shines straight through small cracks and holes in the leaded glass-paned window, original to the 1875 building. Newspaper holds some of the window in place; the rest is held by stone tracery, itself cracked and chipped on the outside by years of weathering.

Starting June 2, the east-facing apse window will undergo a complete restoration. Scaffolding will be erected inside and out and remain in place for two weeks while the window is completely dismantled, and panes packed and shipped to New York City.

Over the next several months, the window will be cleaned, repaired and reassembled off-site. On-site, the original slate roof and flashing of the Memorial Chapel (the addition that houses the crypts of the founders and families) will be replaced, historically accurate detailing at the roofline will be restored, and deteriorated stone and brick masonry – some of it elaborate and hard to match – will be repaired. The window will be reinstalled no later than mid-January 2015.

The chapel’s historical and artistic significance is deeply rooted in the early years of the university. Originally designed by architect Charles Babcock, Cornell’s first professor of architecture, the chapel was deliberately nonsectarian, built to reflect the aesthetic sensibilities of trustee Henry Sage and university co-founder Andrew Dickson White. It houses the largest organ on campus, the eclectic American classic Aeolian Skinner (1940), and a historic Neapolitan organ, built in 1746.

“Sage Chapel is a place for worship and university lectures; celebrations of both the living and the lives of the departed; a place of remembrance for Cornell’s founders, benefactors, alumni and faculty; where remarkable music is performed; and a distinctive space for personal reflection, contemplation, prayer, meditation and quietude. It is a place where spirit and intellect meet,” said the Rev. Kenneth I. Clarke Sr., director of Cornell United Religious Work.

“Sage Chapel is one of our many legacy buildings located in the heart of our campus,” said Vice President for Facilities Services KyuJung Whang, project executive spokesperson. “It is a symbol of the caring community that is Cornell.”

Whang said that plans for the project include special measures to keep disruption at a minimum and to avoid interfering with the chapel’s scheduled events.

A scrim, or clothlike image, of the glass window will be installed while the window is gone. “The chapel wall is approximately 2 feet thick,” said project manager Andrew Germain. “We will assemble a wooden frame to fit the inside of that opening, to which we will attach the scrim. We plan on using digital imaging techniques and lighting to replicate the effect of stained glass, while plywood will be used to seal the outside of the window opening.”

University Photography is taking high-resolution photographs of the window, from which it will create a single image that can then be printed on the scrim.

After the scrim is installed, the interior scaffolding will be removed.

A tour of Sage Chapel June 6 at 9:30 a.m. during Reunion Weekend and modifications to the campus tour are planned to inform visitors about the project and the importance of Sage Chapel in the life of the university.

“Sage Chapel is a special building, and people come in all the time to admire it,” said Germain. “We don’t want to slowly lose the chapel’s significance through decay and water damage.”