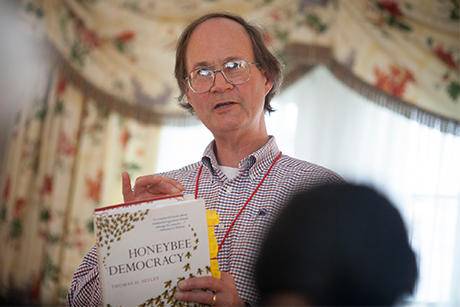 Lindsay France/University Photography
Professor Thomas Seeley details the complex decision-making processes in bee colonies in a reading from his book, "Honeybee Democracy," at a Literary Luncheon May 1. 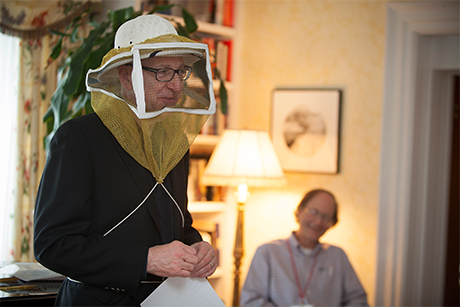 Writer and biologist Thomas D. Seeley finds inspiration among honeybees, a species with much to teach us about “the power of democratic decision-making.”

Seeley discussed the communal habits of bees and read from his book “Honeybee Democracy” at a Literary Luncheon May 1 at the home of President David Skorton and Professor Robin Davisson.

In introducing the writer, Skorton donned a beekeeper’s helmet and veil and stated, “Everything Seeley knows about bees, he learned from me.”

Skorton recalled first meeting Davisson at the University of Iowa in 1995, and, in time, “I learned that she had a longstanding dream of being a beekeeper.” About two years ago they began to act on that dream; a small apiary started for Davisson was a birthday present, Skorton said, and was made possible with the help of Seeley and graduate student Michael Smith.

Seeley is the Horace White Professor in Biology at Cornell, chairs the Department of Neurobiology and Behavior, and is a fellow of the American Academy of Arts and Sciences. His research focuses on collective intelligence in animal groups (including humans) and especially honeybee colonies.

“Honeybee Democracy” (Princeton University Press, 2010) is a work of science written for the general reader.

“I’d written a couple of hard-core biology books, and I thought maybe I could write something a little more personal, more revealing; that a high school student could read and get something out of,” he said.

Seeley recalled growing up in Ithaca and becoming interested in bees as a youngster living in Ellis Hollow, after he “discovered a beekeeper’s two wooden hives, down a dirt road on a nearby farm.”

Reading from the book’s introduction, Seeley explained that in partnership with beekeepers, 200 billion or so “managed honeybees are the primary pollinators for some 50 fruit and vegetable crops, which together form the most nutritious portion of our daily diet.” Also, he said, “inside each teeming beehive is an exemplar of a community whose members work together to achieve shared goals.”

He described the social processes of honeybees, including site selection, as favoring “a quorum vs. a consensus,” and compared colonies to Quaker and faculty meetings, saying they “stress the commonality of interests and not the divergence of interests. That’s what the bees have going for them.”

He peppered his reading with facts and fanciful metaphors, including a passage on the introduction of bees to a flowering garden as “a large dawn-to-dusk escort service.”

The facts included bees’ heat production during winter. A honeybee produces 10 times more heat than an Olympic rowing team, he said: “The fuel is the honey … they’re the only insect species that survives through winter in that way. They evolved in the tropics and expanded north and adapted; building hives, they could eat through the winter.”

In the Cornell hives, about 45 percent of the bees lasted through the most recent winter, Seeley said. “A single colony that gets through the winter can start two new colonies in the summer,” he added.

Seeley also addressed a question about “bee blight” or colony mortality, saying that a mite originally from Asia was transmitting viruses to bees. “Bees out in the woods are fine; by treating bees, we are making them less resilient,” he said.

The Literary Luncheon series is open to the public and intended to bring the community together to celebrate local literary talent, Davisson said. Food served at the luncheon is locally sourced; for Seeley’s reading, local honey, bee pollen and honeycomb were featured ingredients. The series will resume in the fall.