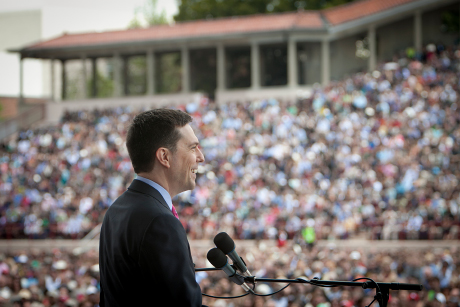 A few minutes into his convocation address, actor Ed Helms cut to the chase: “You do realize I’m not actually Andy Bernard, right? He isn’t a real person. He is a character from a TV show, and I am the actor who played him. Or did you actually invite a fictional person to give this speech?”

But after eight years on the sitcom “The Office” playing Andy, the “conniving, obnoxious, desperate for attention” middle manager and Cornell alumnus with an undying devotion to his alma mater, Helms ended up learning something from his fictional identity. Andy wore his heart on his sleeve, had a great capacity to love and was overall a “glorious, vulnerable fool.”

To learn at least that much from Andy – to “be a fool” – was the message Helms imparted to the Cornell Class of 2014 as its Senior Convocation speaker, May 24.

His remarks followed the arc of his rise to acting fame, first on “The Daily Show,” then “The Office” and the “Hangover” movies, and the wisdom he’s picked up along the way. For instance, though “only a fool would risk failure,” Helms encouraged the Class of 2014 to do just that. “Outcomes, good or bad, allow us to move forward,” he said, after sharing his “epic fail” of directing a music video with some friends just after college.

Also, “only a fool would work hard with no clear objective. Be that fool,” Helms said. Pre-stardom, Helms did voiceover work – he demoed some for the audience – and went on an endless string of auditions in which maybe 1 percent netted paid work. By the time “The Daily Show” audition came up, Helms found he’d become a “Zen master of auditioning,” and he walked in with a “ridiculous amount of confidence.”

“When you try hard at everything you do, even if it feels utterly foolish to do so, you’re opening up future doors and possibilities that you might not be seeing in the moment,” Helms said.

Deliberately scaring oneself might also be considered foolish, but Helms called it a potential catalyst for growth. In 2006 when he was offered the part of Andy, the character was only written into eight episodes. It was a terrifying choice, leaving “The Daily Show” for a role so finite. But by “foolishly” taking it anyway, eight weeks of work turned into eight years.

It was a similar story with “The Hangover;” Helms agonized over taking part in the movie, which he feared might flop with reviewers or detract from the comedic reputation he was trying to build. “I was actually just being arrogant and fearful, preoccupied with catastrophe,” he said. “What I really needed was to disengage my analytical mind and be foolishly in the moment, because the script in front of me was really funny. It made me laugh.”

Helms said he was touched by the invitation to be Convocation speaker, and equally touched that Andy’s “zealous embrace of Cornell” was met with the actual Cornell embracing him right back – this, despite Andy not exactly being the most likeable character. Helms joked that he was pleasantly surprised no one protested his coming, despite having “directly embarrassed this school for eight years on national television.”

“When I got the invitation to speak here, I was scared to open the email because I thought it might actually be a lawsuit.”