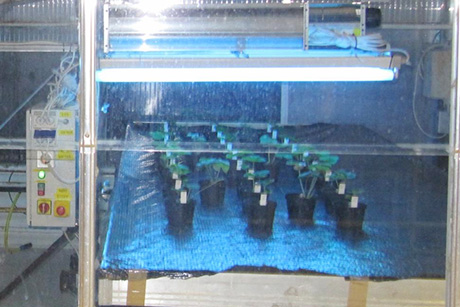 Aruppillai Suthaparan
Cucumbers infected with powdery mildew are treated with UV-B and blue light as part of an experiment to see if light can suppress the pathogen.

A collaborative project by Cornell researchers and colleagues in Norway has literally shed light on a perplexing pathogen problem by harnessing the power of the sun.

While studying the effect of light on powdery mildew – a group of tiny, transparent parasitic fungi that infect many crops, including cucumber, grapes and berries – scientists discovered that they could use light in a novel way to suppress the pathogen without the use of costly fungicides.

A new study by Aruppillai Suthaparan of the Norwegian University of Life Sciences and Cornell plant pathologists Robert Seem and David Gadoury, published in the May issue of the journal Plant Disease, found that UV-B light suppressed cucumber powdery mildew and was especially effective when applied at night. 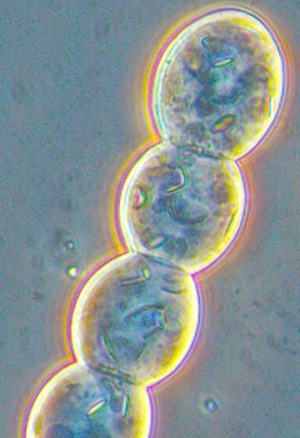 UV-B radiation is found in sunlight and damages the DNA and proteins in living cells in plants and fungi. The transparent powdery mildew fungus, with no pigment to block UV light, is especially vulnerable, Gadoury said.

The researchers infected cucumber plants with powdery mildew and applied UV-B for short spurts of five, 10 and 15 minutes. They found that UV-B exposure reduced cucumber powdery mildew infection from about 90 percent of leaf area to about 5 percent, and also reduced the formation of spores.

The results were even more dramatic when they applied UV-B in the dark of night, or supplemented with only red light (the light that predominates at sunset), allowing them to reduce the exposure time and limit damage to the plants.

The effectiveness of UV-B light is promising, particularly for greenhouse environments, where powdery mildew fungi thrive. It also challenges the conventional wisdom that powdery mildew infestations in greenhouses are driven by high temperatures and humidity. Instead, it may be that the fungi thrive in the enclosed environments because the glass windows of greenhouses and plastic of high tunnels filter out the UV-B light that would otherwise kill the pathogen.

As the costs of energy and transportation increase, more growers are turning to greenhouses and high tunnels to produce a variety of crops locally, and powdery mildew is a severe threat to their success, Gadoury said. To combat the fungi, growers currently use multiple fungicide treatments every year. Eliminating the need for even one fungicide treatment per year could save millions of dollars.

While the study focused on Podosphaera xanthii, one fungal species that infects cucumber, Suthaparan has used the treatment to suppress species of powdery mildew fungi that infect other crops, including grape, strawberry, rose and basil. Gadoury says he hopes to develop a more sophisticated understanding by finding the fungal genes involved in light responses and pinpointing the exact wavelengths of light involved.

“Powdery mildews go after just about everything we want to grow,” Gadoury said. “I feel fairly safe in saying we could kill any powdery mildew with UV-B. Right now we’re at the caveman level. We’ve discovered this club, and we’re going to whack powdery mildew until we kill it.”

Anna Nowogrodzki is a freelance writer for the College of Agriculture and Life Sciences.