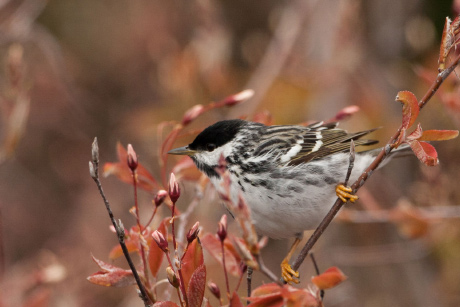 Brian Sullivan
Blackpoll Warblers were one of the first species found to fly a different migration route in fall than in spring. The new research shows that many more songbird species migrate in similar elliptical, clockwise routes.

In one of the greatest feats of endurance in the biological world, millions of tiny songbirds – many weighing less than an ounce – migrate thousands of miles to Central and South America from North America each year. Now, scientists are finding out how these featherweights do it: They use elliptical routes helped by prevailing wind patterns to save calories.

“Most of what we’ve known about migration routes comes from ducks and geese,” said Frank La Sorte, a Cornell Lab of Ornithology research associate and lead author of a May 5 paper in the Journal of Biogeography. “But terrestrial birds are much smaller, and they aren’t reliant on the same kinds of habitats. There really isn’t a narrow migration path for them, and they aren’t necessarily in the same place in spring and fall.”

Techniques for understanding duck, geese and shorebird flyways – such as leg band recoveries and hunter records – don’t work for small songbirds that fly at night.

The new work used a fresh approach and crowdsourced data from the Cornell Lab’s eBird project between 2004 and 2011 to determine songbird migration routes. For each of 93 species, the researchers analyzed thousands of sightings to develop an aggregate picture of species’ locations during spring and fall migration. They then used computer models to sort species with similar movement patterns into groups. They also compared migration routes with seasonal patterns of prevailing winds at night.

The study revealed that most land bird species fit into a western, a central or an eastern group. The researchers kept the term “flyway” to retain the analogy to waterfowl movements, but they noted that these flyways are much more spread out across the continent, and routes in the central and eastern groups overlap considerably.

The analysis also showed that many more land birds than previously realized follow different routes in spring and fall.

Unlike waterfowl, which migrate north and south along the same relatively narrow routes, rather like tractor-trailers on an interstate, songbirds are more like passenger cars touring back roads. They are less tied to a single habitat than waterfowl, so they can fan out across the continent. Many species in the eastern and central groups take southbound routes far to the east of their northbound routes, resulting in a clockwise migration loop that puts some of them out over the Atlantic Ocean on their way to their wintering grounds.

By shifting routes, birds take advantage of stronger tailwinds in spring and less severe headwinds in fall, according to the study. Tailwinds represent a huge advantage for birds heading back to their breeding grounds, La Sorte said, while finding weaker headwinds in fall allows southbound birds to make the best of a bad situation. The pattern has been noted in the past for a few species, such as the blackpoll warbler, but this study gives the first indication of how widespread it is among land birds.

The findings may help conservation planners refine ideas about how and where to plan for conservation along migratory pathways, La Sorte said.