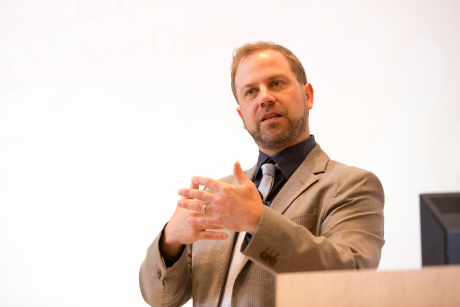 David Burbank/University Photography
Adam Smith, professor of anthropology, lectures on “Barbarians, Backwaters, and the Conflict in Crimea, or How Archaeology Can Save Civilization” at Reunion June 6.

Despite accusations of barbarism from both sides, the ongoing conflict in Ukraine is not a “clash of civilizations,” according to Adam T. Smith, professor of anthropology. He’s spent the last 15 years studying ancient civilizations that offer an unusual perspective on the current conflict, which he shared in a talk with alumni at Reunion 2014.

At the dawn of the Bronze Age in southwestern Asia, two radical social experiments transformed human civilization, said Smith. In Mesopotamia, kings arose for the first time, their authority supported by new forms of intensive irrigation, expanding trade routes and ideologies of sovereign distinction. Populous cities emerged as centers of bureaucratic administration, commerce and religious worship. The kings of Mesopotamia’s early cities waged wars against their rivals and policed the emerging social and economic inequality created by an unprecedented concentration of wealth and power.

As Mesopotamia’s experiment in urbanism accelerated, a counter-revolution took place just to the north in the South Caucasus. At sites like Gegharot in central Armenia, which Smith has been investigating for the last 15 years, small, radically egalitarian villages were forming between 3500 and 3000 B.C. as part of an archaeological culture known as the Kura-Araxes.

Within the Kura-Araxes world, explained Smith, inequality was largely forbidden. There were no temples and no individuals who amassed great wealth. Kura-Araxes burial rituals were simple and modest, in contrast to the increasingly garish Mesopotamian gravesites.

Kura-Araxes culture was not just an alternative approach, Smith argued, but a direct repudiation of the form civilization was taking to the south in Mesopotamia. “We typically think of civilization as a bright light that, once invented spread inexorably across the ancient world, driven by the splendor of its aesthetics and the might of its political economy. But this is not at all the case in the South Caucasus.”

At the height of its thousand-year existence, Kura-Araxes was the most widely dispersed culture in the history of the ancient Near East, with remarkably little variation in its artifacts from sites throughout its range, said Smith. And unlike Mesopotamia, it was also remarkably peaceful, with little evidence of military conflicts.

Perhaps this aversion to warfare was one reason that as the Kura-Araxes culture absorbed new areas; those communities severed almost all ties with neighboring Mesopotamia. Virtually no evidence of interaction can be found between the two cultures.

This, said Smith, is the true meaning of a clash of civilizations: “two worlds predicated on radically different social relations, political orders and cultural values, resulting in almost complete disengagement. A clash of civilization by definition cannot be a military conflict since war presumes that two sides concur on the value of something but dispute its ownership. If West and East were to fight over Crimea or Eastern Ukraine, it would not be because of our differences, but rather because we agree on the geopolitical value of warm water ports like Sevastopol, the necessity to protect allies or confreres, and the strategic value of territory lost or won.”

Smith closed by saying that the Bronze Age teaches us that civilizations do not collapse because of their rivalries. “The very worst thing for both Russia and the West would be to allow a geopolitical dispute to spiral, through economic sanctions, political banishment and cultural exile, into the kind of disengagement that marks a true civilizational divide.”