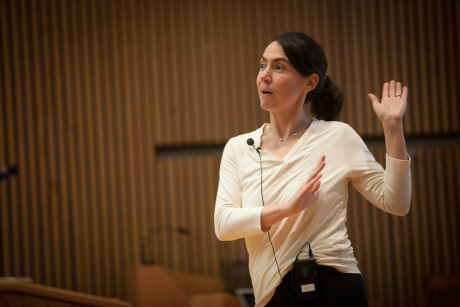 Rachel Bean shared some of the most recent discoveries about the history of the cosmos with a packed room of alumni June 7 during Reunion 2014. The associate professor of astronomy also talked about unresolved cosmic mysteries and encouraged young attendees to consider a career studying the heavens.

Bean works in the field of cosmology, the study of how the universe began and evolved into what we see today, and much of her talk focused on the tools and theories scientists use to learn about the universe’s origins.

“Astronomy is a lot like cosmic archaeology,” Bean said. “There are various archeological fossils or signals that we can see imprinted in the light of the universe.”

The earliest “fossils” of light from our universe that scientists have been able to detect, the cosmic microwave background, happened about 400,000 years after the Big Bang, or more than 13 billion years ago, Bean said.

Scientists can study this period to find clues about even earlier days of the cosmos, Bean said. But the work is challenging.

Although it’s fairly easy to measure the light emitted by stars and galaxies, it’s much more difficult to measure their distance from Earth, Bean said. And even after finding methods to measure distance, scientists have been puzzled trying to determine why the visible mass of stars is so much less than that galaxy’s gravitational mass, which scientists calculate using formulas created by Newton and Einstein, Bean said. They wrestle with questions of what this missing “dark matter” might be and what it might say about how the universe is changing and expanding, she said.

“Could it be black holes? Could it be a new type of matter? Could it be that a different type of gravity is at work in this regime?” she said.

Although particle physics has helped solved myriad problems related to the properties of matter, astronomy has revealed that only 5 percent of all matter is what we see on Earth, Bean said. Another 25 percent is dark matter and 70 percent is what scientists call “dark energy” causing the universe to accelerate, Bean said.

“So we still fundamentally know very little,” she said.

Still, great discoveries are being made in understanding this cosmic microwave background and the universe’s early expansion. And new experiments on dark matter and dark energy will be done at the Large Synoptic Survey Telescope being built in Chile, a partnership between a number of universities including Cornell, the National Science Foundation and the Department of Energy.

“For those of you thinking about your futures and what you might be interested in studying, there will be great challenges here,” Bean said. “We have these massive data sets along with a number of deep fantastical theories, so this is an amazing time to be working in astrophysics.”

Teresa Cooper ’89 traveled to Ithaca from San Francisco to celebrate her 25th reunion and meet friends she’s had since freshmen year. She brought her two children and a friend’s son with her to the lecture. Nick Cooper, her 10th-grader, said he was interested in Bean’s discussions about black holes. He and his sister, Sophie, say they might be interested in a career in science.

“I thought it was cool when she explained how they measure light and how it’s bent by gravitational waves,” Nick Cooper said.