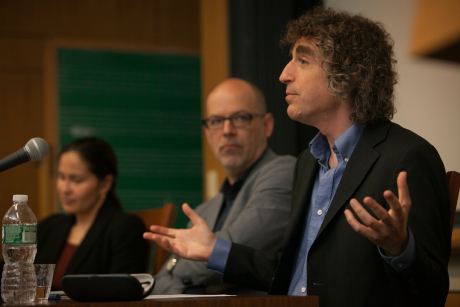 Introducing panelists for the June 6 Reunion current-affairs panel discussion, “America and the World,” in Kaufmann Auditorium, moderator Fredrik Logevall noted the 70th anniversary of the D-Day invasion of Normandy.

“That day marked the arrival of the United States as a superpower in world affairs,” said Logevall, the Stephen ’59 and Madeline ’60 Anbinder Professor of History, vice provost for international affairs and director of the Mario Einaudi Center for International Studies. He introduced two faculty members who focused on American strategic policy and doctrine – since D-Day, now and into the future: Odette Lienau, associate professor of law, specializing in international economic law and debtor-creditor relations, and Jonathan Kirshner, professor of government and director of the Judith Reppy Institute for Peace and Conflict Studies.

Kirshner said this country had a broad consensus for half a century or more “that the U.S. ought be playing a major active and engaged role in the world.

“Due to a pressure on budgets, disenchantment with America’s role in the world, and an American preference to either do things unilaterally or not do them at all,” Kirshner continued, “the commitment to internationalism today in the United States is lower than it has been anytime since before the second world war. This may complicate the ability to exercise a vision of how to advance American interests in the coming years.”

Lienau said the U.S. has a long-stated goal of protecting human populations “and also the promotion of democracy.” A more recent principle or doctrine has emerged: Right to protect, or R2P, from extreme violence – genocide, crimes against humanity and other sorts of mass atrocities.”

R2P, Lienau said, “developed in the international legal arena [and] has three elements: First, the state itself has the primary responsibility to protect its populations. Second, other states have the responsibility to assist that state. Finally, only if that primary state fails is there justification for more coercive economic measures, with military intervention only an absolute last resort.

“This is something that has been invoked by the Obama administration in Libya,” Lienau said, warning: “Responsibility to protect ... still fits into a growing practice of mingling human rights with regime change in a way that can be problematic. This R2P doctrine is still targeted at weaker states, and may be undermine their interest in and support for larger humanitarian action.”

The event was organized by the Mario Einaudi Center for International Studies.