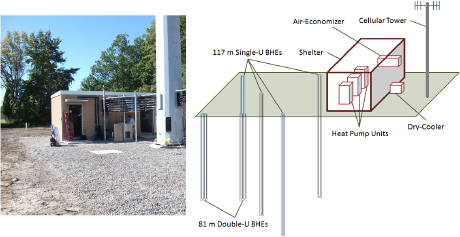 A cell phone tower on Cornell’s campus is doubling as a laboratory to study a ground-sourced cooling system for telecommunications equipment.

The tower, located at the edge of Cornell Plantations, was completed in 2013 and looks like any other. But closer inspection will reveal the tower is equipped with a hybrid geothermal system: six heat exchangers buried underground and three water-to-air heat pumps inside the equipment shelter. Most cell phone towers use standard wall-mounted air conditioners for cooling.

Beckers, whose adviser is Jeff Tester, the Croll Professor of Sustainable Energy Systems in the School of Chemical and Biomolecular Engineering, presented his theoretical modeling work and the design of the experiment at the International Energy Agency Heat Pump Conference in Montreal, May 12-16.

The experimental setup includes a data-logging system to monitor behavior and performance of the geothermal reservoir and heat pumps, including the flow rate of each heat exchanger, the power consumption of different components, and ambient and shelter temperatures.

The goal is to create a reliable, predictive model to allow engineers to assess the feasibility and economic viability of retrofitting a traditional tower with a new cooling system, using Ithaca as a test site, Beckers said. “Once we have a good model, then we can look at other places in the country.”

During construction, Beckers led a seismic survey with several other students to assess the stratigraphy, or rock layers, of the reservoir. In addition, they collected rock cuttings from one borehole at 20-foot intervals during drilling to analyze ground composition.

Besides the wells with heat exchangers, the experiment includes additional wells only for monitoring that are outfitted with temperature sensors at different depths.

“It was a perfect opportunity for Verizon to get something useful out of this research, but it also made a lot of sense for us, because not much is known about this kind of system for cooling cell phone towers,” Tester said.

Many students have benefitted from the project already, Tester added, by learning about geothermal heat pumps, performing reservoir modeling simulations, and participating in the seismic survey data collection.

The research collaboration began several years ago when Verizon Communications CEO Lowell McAdam ’76 expressed interest in sustainable practices for the telecommunications giant. The Atkinson Center for a Sustainable Future hosted an exploratory roundtable discussion for McAdam, then CEO of Verizon Wireless, and a team of his managers. This resulted in an initial grant from the Verizon Foundation establishing several master’s-level “Verizon Sustainability Projects,” including the cell tower project.

Since the original grant from the Verizon Foundation in 2010, McAdam has returned to campus multiple times, including this past fall as the Robert S. Hatfield Fellow in Economic Education.

Verizon CEO challenges us to keep up with technology