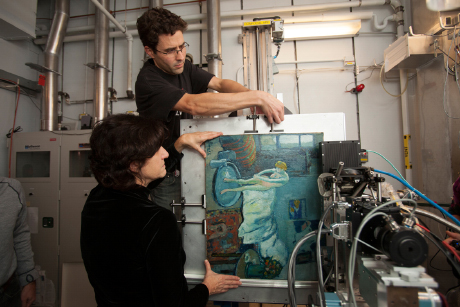 In October 2012, a famous painting paid a short, hushed visit to Wilson Synchrotron Laboratory, where Cornell scientists used an X-ray detector to scan for a suspected secret hidden underneath.

As of earlier this month, the secret is out: Pablo Picasso’s 1901 masterpiece, “The Blue Room,” part of the Phillips Collection in Washington, D.C., is indeed painted over another painting of a bearded, bow-tied man, according to details released by museum officials.

The art-meets-science collaboration was made possible by Jennifer Mass, M.S. ’92, Ph.D. ’95, a chemist and art conservator with the Winterthur Museum in Delaware. Mass had worked with Woll on previous painting scans. She connected CHESS with Phillips Collection conservators eager to learn more about what “The Blue Room” is hiding. 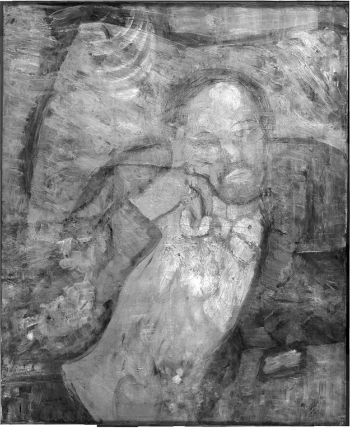 Maia is an exceptionally fast X-ray detector that distinguishes spectral signatures of different elements, such as mercury, iron and cobalt. In the art world, that can mean providing evidence of exactly which materials and subsequent colors artists used in their work.

“Infrared still gives the best fidelity images of this portrait, because it can see clean through many paints,” Woll said. “But the disadvantage is that there’s a fair amount of interpretation involved in knowing what’s creating the contrasts in the images.” That’s where XRF comes in. By giving scanners further clues about coloration, it can help them match a buried portrait with other Picasso pieces of the time, for example.

The Maia detector, developed by scientists at Brookhaven National Laboratory and Australia’s Commonwealth Scientific and Industrial Research Organization (CSIRO), was on loan when it scanned “The Blue Room” back in 2012. CHESS has since acquired its own Maia, in part due to the success of this project and its potential to provide pioneering imaging capabilities in art, biology, materials science and more, Woll said.

Maia is particularly ideal for scanning art, added Chris Ryan, one of Maia’s developers from CSIRO who visited Cornell for the Picasso project and has helped get Cornell’s new detector running. It captures unprecedented spatial details very quickly, limiting risk of damage to delicate works of art, he said.

The revelation of this hidden painting is just the beginning for scientists and art conservators. Using Cornell’s and other data, they’ll piece together an even more coherent recreation of just what’s under “The Blue Room.”

Mass will present a paper, “Pablo Picasso’s The Blue Room 1901: An Intensive Technical Investigation of a Blue Period Painting,” in September at the Synchrotron Radiation in Art and Archaeology meeting in Paris.