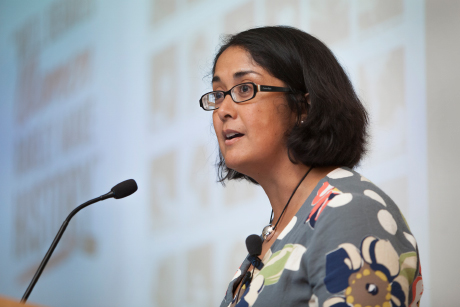 While it may be true that “well-behaved women seldom make history,” the tide of history transforms even the worst behaved women into heroines, argued history professor Durba Ghosh at a Reunion 2014 talk.

Ghosh’s research examines Indian women who committed violent acts, such as attempted assassinations and setting bombs at government sites, with the goal of overthrowing British colonialism in India. These women were dubbed “terrorists” by the British press but are remembered today in India as heroines.

The women came from respectable, middle-class homes, said Ghosh, and were well educated. She used Bina Das, one of the most famous of the female activists of the time, as an example. In 1932 the 20-year-old college student attempted to shoot the British governor of Bengal, but all three shots missed, and she was quickly arrested. Her widely reproduced five-page confession – though banned by the British – explained that her object was to die fighting nobly against the despotic British government that had caused her country such suffering.

What Ghosh found more interesting than Das’ justification for attempted murder, though, was the way Das characterized herself in the confession as having a “tender feminine nature.” She explained her violent actions as a departure from this nature, writing that the British government’s injustices “can unsex even a frail woman like myself, brought up in all the best tradition of Indian womanhood.”

And although India’s female revolutionaries are often described as “studious, quiet and modest” – even the judges who sentenced Das to nine years of hard imprisonment noted her “exemplary” character; these women nevertheless flouted social and cultural norms, said Ghosh. Besides committing violent acts of terrorism, they mingled with men unrelated to them, traveled unchaperoned, dressed in forbidden men’s clothing and lied to their families about their activities. They proudly called themselves “girl terrorists.”

Mahatma Gandi attempted to persuade these women to lay down their arms but never succeeded. “He begrudgingly admitted that they were as committed as he was,” said Ghosh, “that they weren’t on opposing sides but on a spectrum.”

History, like Gandhi, has cast these revolutionaries as respectable patriots rather than terrorists, said Ghosh, with their violent acts and immodesty glossed over.

“Narratives of their lives were constructed as parables for a new vision of an idealized womanhood in the postcolonial period,” explained Ghosh. “The ‘new woman’ was still a good mother, good wife, chaste, modest, pious and educated, but she was also firm in her conviction that political violence was a legitimate form of protest.”

By reading the narratives produced by these women and those sympathetic to them, said Ghosh, we see that “well-behaved women” can indeed make history, because history itself transforms even terrorists into the well-behaved.