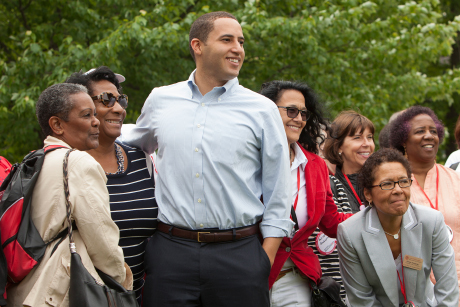 Robert Barker/University Photography
After speaking to the Class of '74 outside of 626 Thurston Ave., Ithaca Mayor Svante Myrick '09 poses with alumni June 6.

People who are most willing to work across cultural differences to communicate and understand each other will be the most successful, according to Svante Myrick ’09, mayor of Ithaca, who credits his political success at least partly to having that ability, fueled by his own diverse background and his Cornell education.

Myrick spoke to alumni and friends during Reunion 2014 on the lawn of the Center for Intercultural Dialogue (familiarly known as “6-2-6” for its address on Thurston Avenue). His talk was sponsored by the Class of 1974 and arranged by Renee Alexander ’74, founding director of the center.

Myrick was elected mayor of Ithaca in 2012, after four years of service on Ithaca’s Common Council that began during his junior year at Cornell. One thing makes the city challenging to govern, he said: Its complexity, with rich and poor living less than a block apart, residents speaking dozens of languages, and professions including even “real rocket scientists.” Satisfying a rocket scientist with the way a pothole in front of his house is repaired can be challenging, he noted.

In a self-deprecating biographical review, he described a diverse upbringing, from spending part of his childhood in a homeless shelter to attending Cornell, drawing frequent laughs with such lines as “the town was so small the black neighborhood was our house.” Deciding, reluctantly, to run for mayor was, he said, one of those moments of desperation about where life was going, where the only other choice might have been to go to law school.

All this led back to his theme of cross-cultural communication. The diverse population of Cornell – and Ithaca – offers students an opportunity to learn these skills, he explained. “This is what we need if we’re going to be successful in this complex world,” he said, but the university must work to foster those skills, through programs like those supported by the Center for Intercultural Dialogue. “You can’t just put a bunch of people together and expect them to get to know each other,” he said.

Asked about his political ambitions, Myrick said: “Run for Congress? No way. What if I won? I’d have to live in D.C.!”

The event concluded with Myrick posing for a group photo with members of the Class of 1974, then a tour of the center. The facility houses offices for many intercultural programs; the Asian and Asian American Center; the Lesbian, Gay, Bisexual and Transgender Resource Center; the Intergroup Dialogue Project; Student Development Diversity Initiatives; Intercultural Programs; and the Cornell Alumni-Student Mentoring Program. More than 100 other cultural and identity-based student organizations are also supported through the center. The building offers study spaces, meeting rooms and casual gathering places designed to encourage people to connect.

The center is a unit of the Office of the Dean of Students.