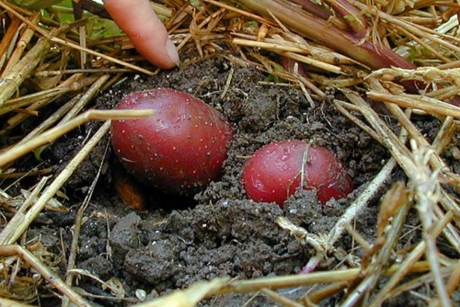 Most farmers fight a constant battle against damaging insects. In a plant science version of “keep your friends close but your enemies closer,” Cornell researchers are working with a common potato pest to see if they can activate the natural defenses of potato plants by managing the bugs, rather than eradicating them.

The researchers aim to harness the plants’ physiological responses to environmental stress – such as infestation – as a sustainable pest control strategy that increases yields and reduces insect damage at the same time.

With seed funding from a 2011 Academic Venture Fund (AVF) award from the Atkinson Center for a Sustainable Future, entomologist Jennifer Thaler, associate professor of ecology and evolutionary biology, led a multidisciplinary team that worked with farmers in the Andes to learn more about how infestation by the local scourge of tuber moths actually helped some potato plants produce up to twice the usual yield of potatoes by harvest. These plants responded to a moderate infestation by “overcompensating” and ramping up production above the losses caused by the insect.

A team member’s previous research had identified one Colombian potato variety that responds to moth damage with robust yields. The AVF fieldwork pinpointed a second variety that is an effective trap crop. By growing a decoy plant that the moths especially like to eat alongside the potato with powerful natural defenses, farmers are able to control the amount of damage to the majority of their crop – enough damage to activate the extra growth, without excessively taxing the plant. This push-pull strategy could help farmers around the world get bigger harvests from each acre of existing farmland, without pesticides, say the researchers.

Now plant biologist Georg Jander, associate professor, and assistant professor of entomology Katja Poveda, collaborators on the AVF research, are launching a study of the overcompensating potato variety to determine what genetic and physiological factors kick-start the plant’s growth.

“Once we have identified the mechanisms by which the tuber moth promotes tuber growth,” Jander explained, “we can apply these mechanisms to increase yield in other potato varieties.” The new project recently received three-year funding of $498,000 from the U.S. Department of Agriculture (USDA).

Potatoes are indigenous to the Andes and remain a staple crop in South America, where more than 3,000 varieties are grown. The AVF-funded research confirmed local farmers’ interest in sustainable pest control.

“We learned that farmers value the health benefits from an alternative pest management strategy much more than we anticipated,” Poveda said. “They are aware of the health consequences of using insecticides and willing to change to alternatives if they do not compromise the productivity of the crop.” In the third year of the USDA grant, the Cornell team will return to Colombia to test the potato in field trials across different altitudes, soils and climate conditions.

An important goal of AVF is to promote effective teamwork across departments. Poveda, for example, collaborates with faculty members who contributed to the AVF research in Colombia, including Miguel Gómez, associate professor of applied economics and management. “My collaboration with Miguel helped me to understand more about the farmers’ needs. I think it will be a lifelong collaboration,” she reflected. “We plan to investigate the ecological and economic consequences of plant-pest and plant-pollinator interaction in different crops – not just in tropical countries, including Colombia, but also in New York state.”