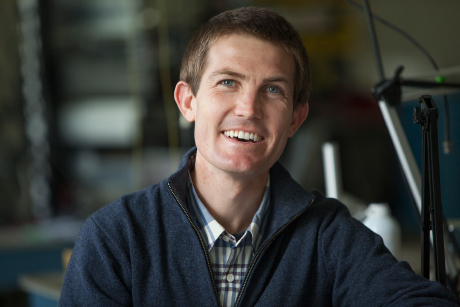 Cornell scientists report research discoveries almost every day, but to the nonacademic world, clicking on a link to a published paper usually leads to a pay wall, barring access without a journal subscription.

Many feel that such research – often paid for at least in part by public money – should be freely available to all inquiring minds, not just paid subscribers. Among them is Cornell postdoctoral research associate Jimmy O’Dea.

When he’s not conducting research with professor John Marohn on improving fuel cells, O’Dea is lobbying for Cornell research publications to be entirely open access. He, along with two graduate students, were primarily responsible for bringing the issue to light in a resolution recently approved by the University Assembly.

This past spring, the UA passed a resolution establishing a committee to study how an open-access policy at Cornell would work. Such a policy would allow the university and its researchers to retain some distribution rights to their published work and to upload them to public databases, though the journals would still own the copyright. Cornell would follow nearly 40 other universities that have adopted such policies in the past several years.

“While Cornell does not have one of these policies, it has a history of supporting open access, like arXiv or other programs here at Cornell,” O’Dea said. “We thought an open-access policy would fit in Cornell’s DNA of sharing work, and also as the land-grant institution that serves the public.”

O’Dea became interested in the issue from studying hydraulic fracturing. Wanting to cut through the rhetoric and hone in on the science, O’Dea recognized that access to primary literature was critical to understanding such topics as the extent to which methane leaks from a drilled well. Cornell students and faculty often take for granted their net ID-enabled access to many of these journals through Cornell University Library, O’Dea added.

The library spends a large percentage of its collections budget buying subscriptions to these journals.

“My experience has been that there is a lot of research coming out of universities that people would benefit from,” O’Dea said. “At the same time, I’d heard of this open-access policy going forward at the [University of California] system.”

The idea gained further momentum when O’Dea took a science policy class taught by Chris Schaffer, associate professor of biomedical engineering, during the fall 2013 semester. O’Dea and fellow students Michelle Delco ’98, DVM ’02, and Mischa Olson researched the issue as their class project, which involved pitching the idea at faculty meetings.

The UA-established committee, led by Schaffer, has broad representation from faculty in the sciences and the humanities, students and digital services experts at the Cornell Library, Schaffer said. They plan to have a draft report ready midway through the fall semester, and to report back to the UA and the Faculty Senate by the end of the semester.

“This is something that I think in principle everybody is going to agree to,” Schaffer said. “It’s great in principle, but how much will it cost to implement? And how much of an additional budget and administrative requirement will this mean for faculty and other scientists?”

One thing the committee will likely consider is how Cornell’s policy would dovetail with federal open-access policies. For example, in 2008 Congress began requiring all National Institutes of Health-funded research to be open access, all of which can be downloaded through the site PubMed Central. The Cornell policy would need to fit seamlessly with such an existing policy and not duplicate efforts.

“The good thing is the NIH has already paved the way a bit, and maybe university policies like ours could help contribute to the change,” O’Dea said. “We don’t think anyone who wants a university policy is hoping that journals go away.”

O’Dea will have to watch the policy take shape from afar. Starting this summer, he will begin a Materials Research Society/Optical Society of America Congressional Fellowship on science policy in Washington, D.C.