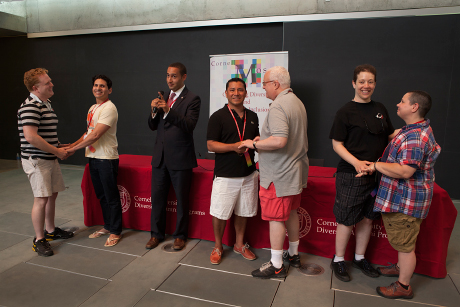 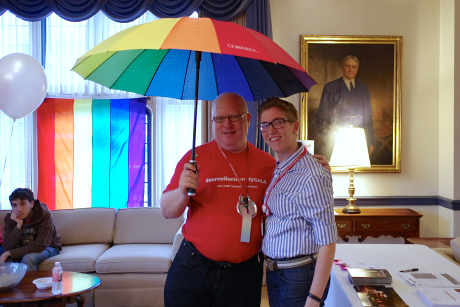 Joe Wilensky
Scott Pesner '87, left, reunion chair for the Cornell University Gay and Lesbian Alumni Association, and Erica Kagan '05 pose under a rainbow umbrella at CUGALA Reunion headquarters in Balch Hall. “We are an umbrella group,” Pesner said. “We represent not only the LGBT community, but also our families and our allies and we wanted everyone to come together to celebrate who we were this weekend.” 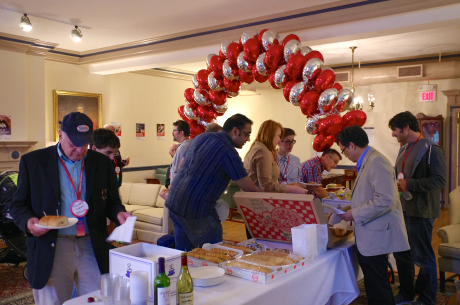 CUGALA, which is believed to be one of the nation’s oldest LGBT alumni associations, welcomed more than 100 alumni, families and allies to Reunion. Members include alumni who were not out while attending Cornell decades ago (the oldest from the Class of 1954) and young alumni who were very involved in LGBT leadership organizations throughout their time at Cornell.

Dan Meyer ’87, a member of the CUGALA board, helped welcome alumni and friends to the group’s Balch Hall headquarters June 5; he said he keeps in mind that alumni from different years found different levels of acceptance at Cornell.

“We’ve got a whole group of experiences that we have to work with, but I don’t think it’s unlike the [larger] Cornell community,” he said. “There’s a big difference between an alumnus from the Class of 1948 and one from the Class of 2008. Any time you’re working with alumni, you have to realize you’ve got a 60-year span in the room and you just have to be very open, you have to be a listener, you have to take a lot of heat at times, and you have to help people focus on what to do going forward.”

At Cornell, Meyer was not out, “not to myself or my family,” he said. “I was about as straight as you could be.” But as a student in the ’80s, he saw backlash against the gay community, “and a lot of my own ability to come out was thinking back on how sad that experience was for the gay Cornellians in the 1980s.” In October 2013, Meyer married his partner, David Davis, in Sage Chapel, in the first same-sex wedding held there. 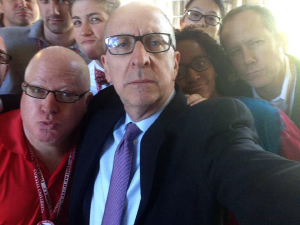 “The LGBT community has always been my community, my home,” said Olivia Tai ’08, a CUGALA board member and vice chair for the reunion. As a student she was president of Haven, the LGBTQ student union.

“One common theme among a lot of our experiences is that it hasn’t always been a positive experience for us,” Tai said. “There’s a little bit of pain because we do have to address some of the issues that may have made our experiences more difficult at Cornell. But I think that coming back here and making new friends, really learning the commonality with each other, is helping a lot. … It’s been great to have the multiple generations finally come together; it has never been this diverse of a gathering before.”

“We’ve been talking about a reunion since 2007,” said Emanuel Tsourounis II ’00, J.D. ’03, president of CUGALA. “We had to grow the organization first.” CUGALA has a network of 50 active volunteers and chapters in New York City, San Francisco, Boston and Washington, D.C., with talk of more to come. “People are stepping up in massive ways to say that if the university is behind us, we want to help re-engage these alumni,” he said.

Tsourounis said Reunion activities were planned to reconnect alumni and celebrate, but also to familiarize them with Cornell LGBT programs and resources. A panel of alumni and faculty (including CUGALA co-founder Art Leonard ’74) discussed events in the year since the U.S. Supreme Court’s decision to overturn parts of the Defense of Marriage Act; a reception marked the Human Sexuality Collection’s 25th anniversary; a wedding and vow renewal was held, officiated by Ithaca Mayor Svante Myrick ’09 (six couples, three gay and three straight, renewed their vows); and several community forums were held featuring transgender alumni, LGBT alumni of color and parents of LGBT children.

Scott Pesner ’87, reunion chair for CUGALA, said that hosting a reunion has already been instrumental in growing the group’s database – already doubling its membership list to more than 3,400.

A lot of LGBT students felt isolated when they were at Cornell, and “we want to tell them, show them, that Cornell is a supportive community,” Pesner said. “It was really important to us, getting that message out, that Cornell wants you back; Cornell is embracing you; please come back.”

Erica Kagan ’05 attended Reunion with her partner, Leslie Healey, along with her mom, Cara Lebowitz Kagan ’77, dad, Len, and other family members. Out when she got to Cornell, she became active in student government. She said getting involved in the organizations and meeting others – including professors who worked in LGBT studies fields – “changed my life completely.”

“Many of the older alumni I meet talk about how they may have been out, and they may have even had a good experience at Cornell, but in a very limited scope,” Kagan said. “We want everyone to feel comfortable at Reunion and see that Cornell has really come a long way.”

CUGALA was first organized by Leonard and Mark Schwartz, also Class of 1974, after they attended their fifth Cornell Reunion in 1979. The group was incorporated in 1980.