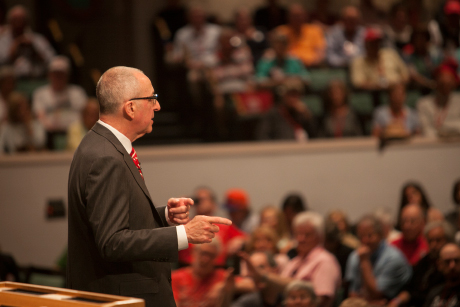 In his State of the University Address June 7, President David Skorton highlighted a few of the many reasons Cornellians remain connected to the university and called upon Reunion participants to continue Cornell’s tradition of tackling “seemingly intractable real-world problems.”

Ithaca Mayor Svante Myrick ’09, celebrating his fifth reunion, introduced Skorton, who welcomed this year’s Reunion participants – including Austin Kiplinger ’39, chairman emeritus of the Cornell University Board of Trustees – back to Cornell.

Skorton promised that he and Professor Robin Davisson will stay in touch with Cornellians after they move to Washington, D.C., next year and outlined several reasons he believes Cornell is “so memorable to so many” – a combination of the remarkable people, physical beauty of the area, opportunities afforded Cornellians and the university’s contributions to meeting the world’s most difficult challenges.

People are the heart of Cornell, Skorton said. He cited some of the many awards and achievements of faculty members, staff, students and alumni, including six Ivy League titles by Big Red athletics; five medals at the 2014 Winter Olympics in Sochi; a recent national championship for men’s lightweight rowing; and 19 “incredibly impressive” Cornell students profiled this spring in Business Insider.

Speaking to the beauty of Cornell’s natural and built environment, Skorton drew attention to three new buildings on campus – Stocking and Gates halls, already finished, and Klarman Hall, in progress; the completed Belfer Research Building at Weill Cornell Medical College; and the projected opening of the first phase of the Cornell Tech campus on Roosevelt Island in 2017.

The opportunities Cornell offers drew more than 43,000 applications for 3,200 spots in the Class of ’18. Noting that college affordability is one of the nation’s major issues, Skorton said that Cornell’s financial aid initiatives since 2008 have made the university more affordable for undergraduates, thanks to the generosity of alumni and their advice to the president to “take care of the students and leave the doors wide open.” Cornell is now the eighth most economically diverse undergraduate student body of national universities in the United States, Skorton said. “Cornell Now,” the university’s capital campaign, has reached $4.7 billion of its $4.75 billion goal, he said.

But, “in this sesquicentennial year, it is worth remembering that for 150 years, Cornell and Cornellians have mobilized to tackle seemingly intractable real-world problems,” Skorton said. Among them, Skorton cited the university’s history of addressing issues of racial diversity and inclusion from its founding to the present, including the work of Cornell’s seventh president, James A. Perkins, and Trustee Emeritus Tom Jones ’69, who established the Perkins Prize for Interracial Understanding and Harmony 20 years ago. This year’s recipient was the Intergroup Dialogue Project, a course in which students discuss race, gender, religion, sexual orientation and socio-economic status.

Most recently, Skorton said, a study of the campus climate for students last fall found that “while most students happily have positive perceptions of the Cornell experience,” the degree to which students feel included, respected and safe on campus “varies significantly depending on their social identities.” The study is already informing the university’s work.

Efforts to improve the campus climate also include the university’s efforts “to prevent and respond effectively to sexual violence and to change the culture that permits this to exist,” Skorton said, citing the work of the university’s Council on Sexual Violence Prevention.

Cornell is also leading the way in changing the undergraduate curriculum in programs “designed for the needs of today and the needs we anticipate for tomorrow,” Skorton said, noting the new universitywide undergraduate business minor; a variety of team projects in engineering, sustainability and new technologies; and the China and Asia-Pacific Studies Program.

Skorton closed by inviting the audience “to be part of the continuing conversation about difficult issues – and help identify solutions – that are the hallmarks of revolutionary and beloved Cornell. As I welcome you home this weekend, I welcome you also to that larger task.”