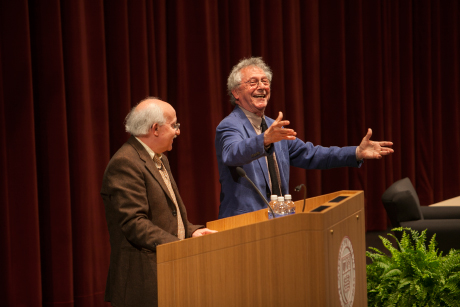 A pair of Cornell professors took Reunion-goers on an honest, reflective tour of Cornell history since 1940, sharing insights on profound changes in students and faculty.

Professors Glenn Altschuler and Isaac Kramnick delivered the 2014 Spencer T. and Ann W. Olin Lecture, “The Way We Were – and Are: Cornell Professors and Students, 1940-Present,” June 6 to a packed Bailey Hall. Altschuler is the Thomas and Dorothy Litwin Professor of American Studies and dean of the School of Continuing Education and Summer Sessions. Kramnick, the Richard J. Schwartz Professor of Government, is set to retire from Cornell in 2015 after 43 years.

Altschuler and Kramnick are co-authors of an upcoming book, “Cornell: A History, 1940-2015,” on which their lecture was based. The book will be released Sept. 9 by Cornell University Press.

Cornell students look very different today than 50 years ago, Altschuler said. In 1965, they were mostly white and male. The Class of 2017 is much more ethnically diverse, and women are much better represented.

Today’s students, in the professors’ views, are better traveled, more openly religious, politically conservative and socially liberal, “and in some ways more sophisticated” than previous generations, Altschuler said. They’re also closer to their parents, who are from a generation that’s “less inhibited, more sexually liberated, more open and more permissive than many of your parents,” he told the audience.

But, he proffered, students today are more “brittle” than past counterparts. “Accustomed to praise and high grades, they do not take criticism all that well. Nor do they read and write as much or as well as those who came before them,” Altschuler said, drawing amused nods.

Yet they’re generous and compassionate, with a striking commitment to public service, as evidenced by how many Cornell students join the Peace Corps or Teach For America, he said.

The role of identity politics among students in the last 30 years has been strong, Altschuler said. Ethnic studies programs have proliferated, as have culture-specific programs like the kosher dining hall and the Muslim Cultural Center.

“Cornell continues to struggle to find ways of establishing and supporting additional communities to complement what we consider to be the legitimate place of ethnicity, race and gender in identity,” Altschuler said.

Demographics have changed, but there has been “no great change,” he said. The Cornell faculty is still “mainly men, mainly white, mainly straight and mainly left of center.”

What has changed greatly over the last few decades is faculty life, Kramnick said. Traditionally, the role of the professor as a sage, campus-based student mentor was almost “mythic.”

Faculty members now have many more off-campus obligations, a trend beginning with the rise of research universities in the 1950s and ’60s. They are more focused now on public acclaim for their research, and are often away from campus. In 1972, when Kramnick arrived at Cornell, faculty almost never left campus, and their reputations and livelihood were based firmly in Ithaca.

Campus life in general has become more depersonalized – he used poor attendance of faculty meetings as an example – but he has also seen signs of a “revised focus of Cornell faculty on their traditional roles of mentoring and enlightening undergraduates” in recent years. The West Campus house professors have had positive impact on many students, he said, and the first-year reading project always draws many faculty members to volunteer to lead discussions.

Today’s faculty are good at multitasking, and though they’re often pulled in many directions, most are still effective mentors and dedicated to their students, he said.