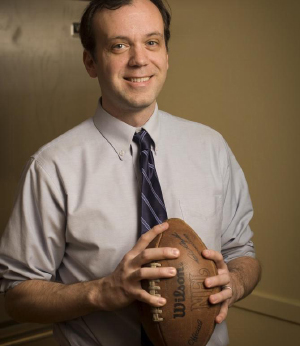 So you weren’t team captain – in fact, you mostly warmed the bench – and the Tinytown Tigers never led the league.

No matter. Proudly list high school sports experience on every résumé, now and for the next 50 years of your career. Past participation in competitive team sports marks you as a winner in the competition for better jobs, a Cornell biodata analysis has determined.

“Research with current workers and with retirees tell us: Participation in competitive youth sports ‘spills over’ to occupationally advantageous traits that persist across a person’s life,” says Kevin M. Kniffin, postdoctoral research associate in the Dyson School of Applied Economics and Management.

Scanning your résumé, the savvy interviewer asks: “What sport did you play in high school?”

Nothing wrong with that – although labor law forbids discrimination by weight and height, age, race and other biodata – and the question is more than a conversation-starter.

“For managers [our] findings support the common practice of asking job candidates … whether they played competitive youth sports,” the researchers report. “This question could have importance for responses from older job applicants who are relatively far removed from high school just as much as … for 30-year-old applicants.”

Just don’t inflate your stats. Things like that can be checked.

Kniffin and co-authors (Mitsuru Shimizu, a Cornell postdoctoral researcher during the study and professor Brian Wansink) wrote “Sports at Work: Anticipated and Persistent Correlates of Participation in High School Athletics,” which the Journal of Leadership and Organizational Studies published online this week. Some 43 percent of current high school seniors compete in sports, the researchers report.

Their test of workers’ opinions about leadership abilities and character traits surveyed 66 adults (41 were women, average age was 39 years, and a third had played competitive sports in high school). Survey subjects were asked: What kind of employee is most likely to display “self-confidence, leadership, time-management skills, volunteerism, charitable behavior and self-respect?” Choices were adults who, as youths, played varsity basketball in high school, ran for the school’s cross country team, played trombone in the school band or participated in the yearbook club.

Whether or not they, as high-schoolers, played competitive sports, most workers agreed: Participation in youth athletics makes adults more self-confident leaders with lots of self-respect.

The only votes has-been trombone players and yearbookers won were “volunteerism” and “charitable behavior.” Former athletes were not expected to excel in those “prosocial” arenas, according to the study.

Without dissing school band marchers and yearbook editors, Wansink, the John Dyson Professor of Consumer Behavior, says: “Something very special happens on scholastic playing fields and tracks and basketball courts. Student-athletes, whether or not they are captains or leaders of their teams, are exposed to leaders in an environment that rewards transformational leadership. The focus in youth sports is on prosocial traits: respect, trust and confidence. That experience spills over wherever their adult lives take them.”

The research was partly funded by Cornell’s Institute for the Social Sciences.