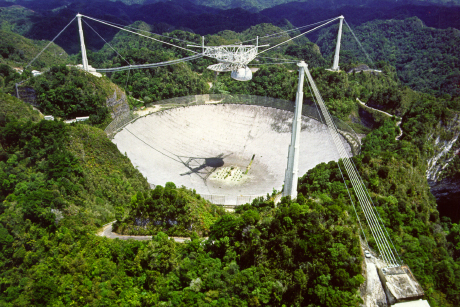 The Arecibo Observatory has captured one of the most fleeting, mysterious and rare deep-space events – a so-called “fast radio burst” (FRB) that lasted a mere three one-thousandths of a second. Cornell, McGill University and other astronomers report this peculiar event today (July 10) in the Astrophysical Journal.

Until now, the Parkes Radio Telescope in New South Wales, Australia, had discovered all five previously known FRBs. This breakneck burst was found Nov. 2, 2012, and not formally reported until this paper, as astronomers needed to verify its authenticity and to rule out cosmic noise.

“It was a single pulse –  additional observations of the same direction on the sky have shown nothing,” said James Cordes, Cornell professor of astronomy and an author on the paper. “The nature of these bursts had been in doubt until recently, and the discovery at Arecibo cements the case that they are astrophysical, rather than some unique form of radio interference at Parkes.”

Like a gigantic ear attentive to the heavens, the Arecibo Observatory in Puerto Rico is Earth’s largest single-aperture radio telescope, tuned to find pulsars, galaxies, objects in the solar system and even the Earth's ionosphere. It’s so large that the height of the Empire State Building fits in its diameter, and the Washington Monument fits in the dish’s focal point.

Laura Spitler, M.S. ’10, Ph.D. ’13, discovered this burst as she sifted through 2012 data as a doctoral student. (She now works as a post-doctoral researcher for the Max Planck Institute for Radio Astronomy in Bonn, Germany.)

The processing software searches the large amount of data for astrophysical pulses. The algorithms also pick up a lot of man-made signals, so Spitler searched the output by eye to find the rare, real pulse. “Once I saw the characteristic signature of an astrophysical burst, I immediately looked at the data in various ways to convince myself – and everyone else – that it was real,” Spitler said. “The process is not glamorous.”

This pulse seems to have traveled from beyond the Milky Way galaxy, the scientists say.

“We really have no handle on what they are,” Spitler explained. “Scientists are highly skeptical of such discoveries … [that] all of the bursts up until now had been discovered by the Parkes telescope was a cause of concern. Now, with the discovery of a burst from Arecibo, we are more confident that FRBs are astrophysical phenomena, and discovering and classifying them should be a priority of radio astronomical observatories in the future.”

Other Cornell authors on the paper, “Fast Radio Burst Discovered in the Arecibo Pulsar ALFA Survey,” include Shami Chatterjee, research associate in astronomy, and Robert Wharton, graduate student in the field of astronomy. Victoria Kaspi, McGill University astrophysics professor, is principal investigator on the pulsar-survey project. The Cornell Center for Advanced Computing provided critical data storage and database support. The research was supported by the National Science Foundation, as well as Canadian and European sources.