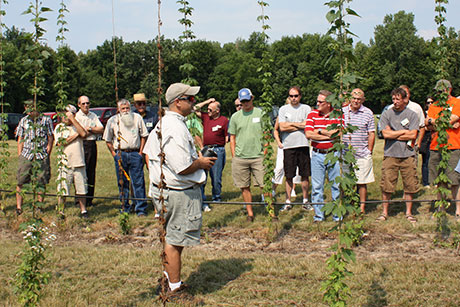 A little over a century ago, New York was home to more than 40,000 acres of hops. Disease, pests and Prohibition saw that number dwindle to zero.

A revival of the industry is underway, and 250 new acres are under production today, thanks to an increasing number of eager yet often inexperienced growers. Many of them turn to Cornell Cooperative Extension (CCE) hops specialist Steve Miller for help.

“We have a real mix of people,” Miller said. “There are only a couple of growers who’ve had hops in for more than 10 years in the state. The vast majority of growers have only had them in for a year or two.”

Many attendees at the Hops Field Day said they have experimented with growing just a few hops plants for personal use but are looking to expand due to the popularity of craft brewing in New York.

Researchers at NYSAES are in the process of evaluating 30 varieties of hops to determine which are best suited for growing in the region. This work, as well as research on malting barley, recently received a $350,000 boost in state funding from N.Y. Gov. Andrew Cuomo.

At the workshop, participants learned about the hops industry from the perspectives of both farmers and brewers, and from experts on topics from processing and pest management to sales.

“It’s all helpful when you’re just starting out,” said Michael Sanford, a farmer who attended the event. “There’s a lot to learn from people who have been growing hops for some time and from the up-and-comings as well.”

“Hops will grow fine in your garden without putting in much effort, but competing in a market is a totally different thing,” added Rick Pederson, owner of Pederson Farms in Seneca Castle, N.Y.

Participants also learned that growing the hops is only half of the battle – processing and storing hops is a major undertaking in and of itself. They got some practical pointers from Justin Whipple of Whipple Brother Farms in Hamlin, N.Y., who explained the benefits of turning the hops into pellets rather than the natural leaf form.

“Leaf hops take up a tremendous amount of space,” Whipple said. “Pellet hops, packaged correctly, can last up to 20 months in cold storage, compared to about five to seven months for leaf hops.”

The next hops field day will be Aug. 2 in Oneonta/Cooperstown.