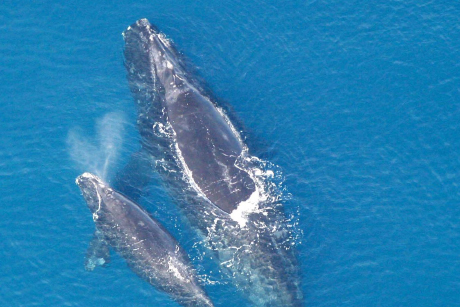 A pleasant scientific surprise: The North Atlantic right whale population – once projected for extinction – exhibited an unexpected increase in calf production and population size during the past decade.

This baby boom has been linked to a climate-induced shift in the oceanic ecosystem, one that has improved the feeding conditions for the whales in the northwest Atlantic and especially the Gulf of Maine during the decade of the 2000s, according to two Cornell oceanographic researchers.

Relative to the lean reproductive years right whales suffered during the 1990s, the population during the first decade of the 21st century has seen a significant increase in reproduction, report doctoral candidate Erin Meyer-Gutbrod and professor Charles H. Greene in the forthcoming issue of Oceanography (September 2014).

By the late 19th century, the whaling industry had all but killed off North Atlantic right whales, valued for their oil, which was used to burn in lamps and lubricate machinery. The whale population has exhibited a gradual but bumpy recovery since the species gained protected status during the mid-20th century.

Annual surveys of the population since the 1970s have enabled researchers to study right whale population dynamics. During the 1980s, thanks to good feeding conditions, the population exhibited positive growth.

During the early 1990s, the Arctic underwent a decadelong climate shift that resulted in an influx of freshwater into the northwest Atlantic. Greene says this “great salinity anomaly” of the 1990s freshened coastal shelf ecosystems in the northwest Atlantic. The ecosystem became unfavorable for the copepod species Calanus finmarchicus – the whales’ main source of nutrition.

With feeding conditions for the whales especially poor when Calanus suffered a crash in 1998, the whale population, in turn, failed to reproduce in 1999 and 2000.

The subsequent resurgence of Calanus during the 2000s has been linked to a shift in the Arctic climate system back to conditions similar to the 1980s. This “decadal-scale variability in right whale reproduction may be largely driven by fluctuations in prey availability linked to climate-associated ecosystem regime shifts,” explained the researchers.

“Rather than facing the prospect of eventual extinction, as was forecast at the beginning of the new millennium, the right whale population in 2010 was on a positive trajectory toward recovery,” the researchers wrote. However, they said it is important to note that “continued elevated rates of right whale calf production are contingent upon favorable future prey conditions.”

The research, “Climate-Associated Regime Shifts Drive Decadal-Scale Variability in Recovery of North Atlantic Right Whale Population,“ was supported by the National Science Foundation through the U.S. Global Ocean Ecosystem program, and by the Department of Defense through a National Defense Science  and Engineering Fellowship.