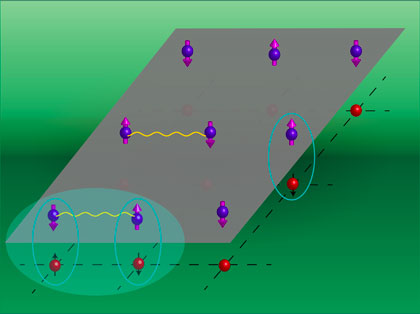 Davis Lab
In a superconductor, free electrons (blue) with complementary "up" and "down" spins can join like tiny bar magnets. In "high-temperture" superconductors, electrons bound to surrounding magnetic atoms (red) give a "push" to make that happen.

For decades, many physicists have taken for granted a theory that electrons in high-temperature superconductors are nudged into “Cooper pairs” that can carry an electric current without resistance by their interaction with the magnetic fields of nearby atoms. Sensitive measurements at Cornell have finally supplied the first experimental proof of the theory.

Going further, researchers have shown that the magnetic interaction theory correctly predicts a wide variety of the properties of a superconductor. The discovery contributes to the quest for superconductors that would work at or near room temperature, creating a revolution in power transmission and electrical engineering: Maybe the answer is stronger magnetism.

The work is reported in the July 21 online edition of the Proceedings of the National Academy of Sciences.

Superconductivity was first discovered in metals cooled almost to absolute zero (-273.15 degrees Celsius or -459.67 Fahrenheit). The explanation is that conducting electrons travel in pairs. An electron has a tiny magnetic field, a property physicists call “spin.” In a superconductor electrons join with their spins “up” and “down,” like two bar magnets with opposite poles together. The magnetically neutral pair can then move without resistance.

Physicists agree that in traditional superconductivity the pairing is driven by vibrations in the crystal lattice, but this can happen only at temperatures very near absolute zero. Recently discovered materials superconduct at temperatures up to around 150K (Celsius degrees above absolute zero). Theorists proposed that magnetism could provide a force strong enough to form Cooper pairs at such temperatures.

University of Illinois theoretical physicist Dirk Morr suggested that these magnetic interactions could be observed in unusual materials known as “heavy fermion” superconductors. J.C. Séamus Davis, the James Gilbert White Distinguished Professor in the Physical Sciences at Cornell and director of the Center for Emergent Superconductivity at Brookhaven National Laboratory, made the measurements Morr suggested on a heavy fermion material made up of cerium, cobalt and indium (CeCoIn5), using a highly sensitive scanning tunneling microscope he designed that scans a surface in steps smaller than the width of an atom, reading the energy levels of electrons under its probe.

“This has not been achieved before because we needed a great deal of energy resolution,” Davis said. “Over the last decade we have improved the resolution of the electron energy by a factor of about a thousand to where we can observe the magnetic properties.”

Heavy fermion materials are so-called because electrons that move through them to conduct electricity travel sluggishly, as if their mass were much greater than expected. These “heavy” electrons are in an indeterminate quantum state, Davis explained, like the famous Schroedinger’s cat, which was simultaneously dead and alive until it was observed. They are either magnetic and at a specific location or not and free to move. A mathematical manipulation of energy-level scans enabled the researchers to observe and compare both states, and read how strongly electrons would be magnetically attracted or repelled.

The real test of a theory is to see if it makes predictions that are borne out in reality. Plugging the measured magnetic force between electrons into the equations of Cooper pair theory, the researchers correctly derived the temperature at which CeCoIn5 becomes a superconductor, and many other properties.

“There is a large school of theorists who believe the mechanism of superconductivity is the same in other important materials as in heavy fermion materials,” Davis noted. CeCoIn5  becomes a superconductor at just 2.3K. The higher temperature superconductors may contain more intense magnetic interactions. “If the glue is magnetic, as we have shown here, then what you want is the strongest magnetism,” Davis said.

“We now have an excellent starting point to explore how superconductivity works in other complex materials,” Morr said. “With a working theory we can now investigate how we have to tweak the system to raise the critical temperature, ideally all the way up to room temperature.”

Davis’ work is supported primarily by the U.S. Department of Energy.