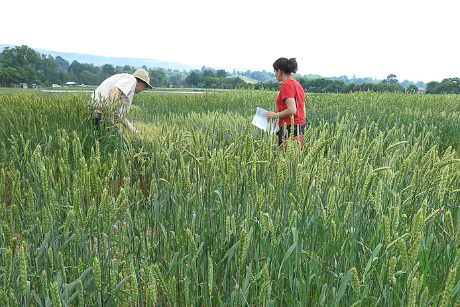 The popularity of breads and other baked goods boasting organic production or use of “heritage” grains has risen recently, presenting an opportunity for growers, but only if these crops do well in their region.

Cornell researchers have been testing several types of modern, heritage and ancient grains to help local farmers determine which varieties would be most feasible for them to grow.

“People will pay more for organic crops,” said David Benscher, research support specialist in the Department of Plant Breeding and Genetics. “Then we go a step further by looking at heritage lines, like these older wheat lines from the mid-late 1800s. A quality crop of one of these grains in the proper market will gain you some extra value.”

The trials, now in their third year, consist of small plots of modern and heritage wheat, spelt and the ancient grains emmer and einkorn. Some of these varieties were actually bred at Cornell many decades ago. The grains were planted in both winter and spring to assess seasonal versatility, and presenters shared their findings on yield, temperature tolerance and disease susceptibility.

“This is really a massive effort to get a lot of information,” said Elizabeth Dyck, founder and coordinator of the Organic Growers’ Research and Information Sharing Network, which partnered with Cornell on the field trial project.

Why are so many people willing to pay more for these grains? For some, it’s about taste and texture. Different wheat lines can vary greatly in flavor, protein content and other properties that can influence the final product.

One protein in wheat is gluten, which adds to the elasticity of breads, and it generated a great deal of discussion among the growers due to its interest among consumers.

“One of the most common food-related trends in pop culture right now is for people without celiac disease to avoid wheat because they find that it for some reason adversely affects them,” said Lisa Kissing Kucek, a graduate student in the field of plant breeding.

Heritage and ancient wheat appeal to some people with dietary sensitivities, because certain varieties have lower levels of gluten and other possibly harmful compounds. But Kucek warned that not all old wheat varieties are less harmful.

And gluten might not actually be the culprit in some cases, she said.

“People with gluten sensitivity may actually be reacting to fructans, which are carbohydrates that are also found in wheat,” Kucek said.

The tour wrapped up with a demonstration of de-hulling machinery, including a unit designed by engineering students at Cornell. Unlike modern wheat, these specialty grains have a protective layer called a hull that must be removed before the wheat is ground up into flour.

“There are still improvements to be made, but it accomplishes a good amount of de-hulling for a low-cost machine,” Benscher said.

The field day was one of several hosted by the Cornell University Agricultural Experiment Station this summer. New York City area gardeners can learn about floral arranging and victory gardens at the Long Island Horticulture Research and Extension Center open house July 12; weed warriors can add to their knowledge arsenal at the New York Weed Science Field Day in Freeville (vegetable crops) or Aurora (field crops) July 16; and holistic harvesters can hear about integrated approaches to crop, soil and pest management at the Musgrave Research Farm Field Day in Aurora July 17.

An ancient breed is resurrected in great grain revival