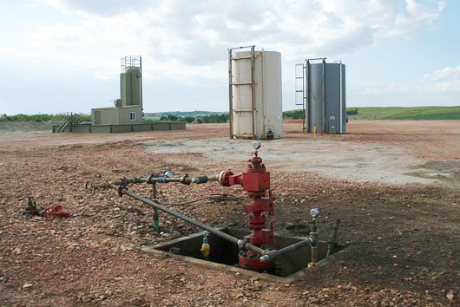 Provided
A recent study finds that an increase in earthquakes in central Oklahoma may be attributed to subsurface wastewater injection at a handful of wastewater disposal wells.

The dramatic increase in earthquakes in central Oklahoma since 2009 is likely attributable to subsurface wastewater injection at a handful of wastewater disposal wells, finds a study published in the journal Science July 3.

The research team was led by Katie Keranen, professor of geophysics at Cornell, who says Oklahoma earthquakes constitute nearly half of all central and eastern U.S. seismicity from 2008 to 2013, many occurring in areas of high-rate water disposal.

“Induced seismicity is one of the primary challenges for expanded shale gas and unconventional hydrocarbon development. Our results provide insight into the process by which the earthquakes are induced and suggest that adherence to standard best practices may substantially reduce the risk of inducing seismicity,” Keranen said. “The best practices include avoiding wastewater disposal near major faults and the use of appropriate monitoring and mitigation strategies.”

"Earthquake and subsurface pressure monitoring should be routinely conducted in regions of wastewater disposal, and all data from those should be publicly accessible. This should also include detailed monitoring and reporting of pumping volumes and pressures,” Keranen said. “In many states the data are more difficult to obtain than for Oklahoma; databases should be standardized nationally. Independent quality assurance checks would increase confidence.”