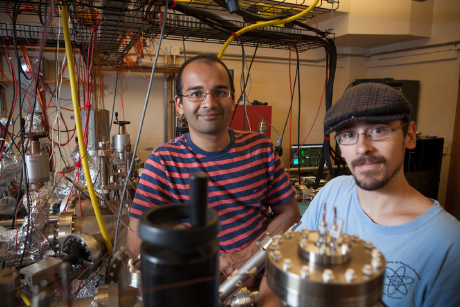 Particle accelerators, like the Cornell Electron Storage Ring (CESR), are involved in fields ranging from cancer research to archaeology, art and chemistry. New interdisciplinary research on a part of the accelerator called the photocathode by physics graduate student Siddharth Karkare has the potential to dramatically improve accelerator performance.

In order to improve all three steps of the photoemission process – excitation of electrons using light, their transport to the surface of the electrode and emission from its surface – Karkare has been studying the materials used to make the photocathodes. “It was really the connection between material scientists and accelerator physicists that drove the research,” he said. “We realized that what is already well known in other fields could help a lot with our research.”

That effort involves all three of Cornell’s photocathode-related facilities: Newman Lab, where Karkare and colleagues have built various photocathode surface and electron beam diagnostics all maintained at ultra-high vacuum comparable to the vacuum in deep space; Wilson Synchrotron Lab, home of the Cornell High Energy Synchrotron Source, where photocathodes can be tested in an actual accelerator; and Phillips Hall, where a technique called molecular beam epitaxy is used to grow thin materials for use as photocathodes.

This cross-disciplinary teamwork includes William Schaff, a research associate in the School of Electrical and Computer Engineering, and Richard Hennig, assistant professor of materials science and engineering, among others.

“Cornell is an ideal place for collaboration,” Karkare said. “The walls between departments are very small, so it’s very easy to go over to someone in another department and work with them.”

He adds that most particle accelerator work has traditionally taken place in national laboratories; Cornell is a rare exception. “That’s Cornell’s unique advantage: We have a particle accelerator in a university setting which allows us to make progress rather quickly.”

The technology Kakare and colleagues have adapted for the first time uses Schaff’s molecular beam epitaxy setup to grow materials layer by layer, a technique well known to material scientists. “It’s basically atomic spray painting of the materials,” Kakare says. “You can grow one atomic layer at a time, and you can design the structure however you would like it to be.”

A recent paper by Kakare and colleagues published in Physical Review Letters describes their modeling of the photoemission process using a so-called Monte Carlo, or probabilistic approach, which they then used to design a layered structure for a gallium-arsenide photocathode that showed improved performance by 30-50 percent. Karkare’s co-authors on the paper included research associate Luca Cultrera; Laurent Boulet ’14; and associate professor of physics Ivan Bazarov, Karkare’s adviser and the director of the research.

Photocathodes have applications in other fields besides particle accelerators. For example, the technique of visualizing protein dynamics using a free electron laser, which can be several kilometers long, Karkare says. “With improvements in photocathodes, the electron diffraction technique, which is a single lab-based setup less than 10 meters long, could be used for the same purpose. If we are able to accomplish that, it would be a huge jump in protein research.”

Karkare’s research can benefit areas of nonscientific interest as well; for example, night vision goggles and infrared imagery, which are indispensable tools for search and rescue operations, use photocathodes that detect infrared light.

Because modern accelerators are so limited by photocathodes, interest in the field has been steadily increasing in the last five years, Karkare says. “Just by improving this tiny little photocathode, you can improve the performance of most modern-day particle accelerators by an order of magnitude. That’s the real motivation of our work.”