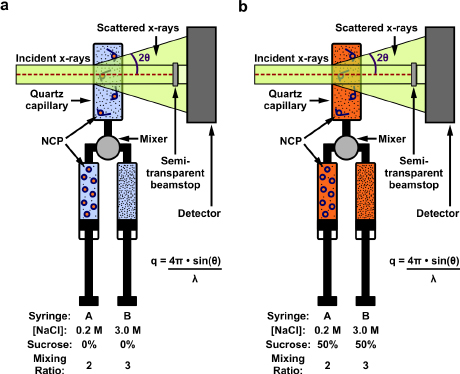 Pollack lab
A schematic of the stopped-flow mixing experiment to probe salt-induced disassembly of nucleosome core particles. The left side shows NCPs in solution before the addition of sucrose. On the right, sucrose is added to increase solvent density, effectively erasing the signal from the protein.

Biophysics is a science of shapes – the shapes of molecules like DNA as they wrap and unwrap around protein cores, for instance. Cornell researchers have unveiled a new method for observing such processes in real time.

Professor of applied and engineering physics Lois Pollack and her research group have devised a way to watch dynamic movements and shape changes of molecules in solution using a new X-ray scattering method. In a Nucleic Acids Research paper recently published online, they proved their method by observing transient nucleosome structures as DNA unwound from them. The work was done in collaboration with professor Lisa Gloss and her research group at Washington State University.

When stored away, DNA is wrapped like thread around a core of eight proteins called histones. This assembly is known as a nucleosome core particle (NCP). The entire system takes many shapes as the DNA unwraps for processes including transcription and replication of genetic material.

The structure of NCPs is known from X-ray crystallography, but these samples are frozen in time; large-scale movements can’t be observed with crystallography. But it is a different story if the NCPs are in solution, where dynamic processes can be triggered and observed. The modulation of DNA accessibility by nucleosomes, for example, is a process that involves DNA release from a crumbling histone core, and many intermediate shapes are involved.

“It occurred to us that it would be really great to watch these huge changes taking place in solution, but the presence of so many different components makes it hard to figure out what is happening,” Pollack said. “But what if we could make the proteins disappear, to focus only on the important changes in the DNA?”

The method involves a trick that blanks out the proteins at the core of the structure, leaving only the DNA structure that can be watched without distraction. The trick works because proteins are less dense than DNA. If the density of the surrounding solution is increased to equal that of the protein, it “blends into the background,” Pollack said, and the remaining signal is only from the DNA.

The researchers started with nucleosome core particles that are wrapped tight with DNA. They added sucrose – table sugar – to increase the density of the solvent,  “erasing” the signal from the protein, Pollack said, and then used salt to force disassembly of the particles.

“The protein is there; we just don’t see it. That’s the beauty of this technique,” Pollack said. This so-called contrast variation method has been used by others to study nucleic acids in complex with proteins, but Pollack’s group added time resolution to the mix, using a rapid fluid mixer to initiate the reaction.

While watching DNA unravel from the nucleosome, the researchers made observations that could provide insight into these structures. For example, they noted asymmetrical intermediates from the time the unraveling began to the complete unwrapping.

Pollack’s ultimate goal is to use the method to study the ribosome, a large RNA machine held together by an array of proteins.

The paper is titled “Revealing Transient Structures of Nucleosomes as DNA Unwinds,” and its co-first authors are postdoctoral associate Yujie Chen and graduate student Joshua Tokuda.