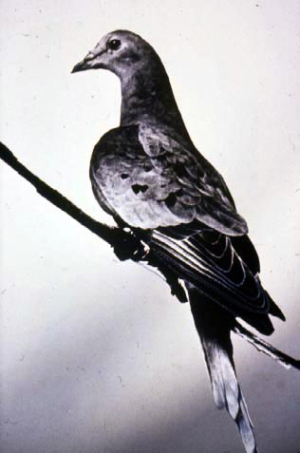 Martha, the very last passenger pigeon in the world, died in her cage at the Cincinnati Zoo 100 years ago on Sept. 1, 1914.

The grim centennial anniversary is an urgent reminder of the impact that greed and unregulated hunting can have on species, as passenger pigeons went from being the most abundant bird in North America, and possibly on Earth, to extinction in about 40 years, said Ron Rohrbaugh, assistant director of conservation science at the Cornell Lab of Ornithology.

On the heels of the anniversary, the lab has played a major role in the 2014 State of the Birds report, which will be released Sept. 9. The report notes that the passenger pigeon demise is a warning sign that humans need to make concerted efforts to conserve 230 bird species it identifies that struggle today to survive.

People estimate that there may have been as many as 5 billion passenger pigeons in the Midwest and the eastern United States in the early 1800s. Hunters described flocks so dense they would blacken out a midday sky. Alexander Wilson, the “father” of American ornithology, once estimated that a single Kentucky flock contained 2,230,272 birds.

• John Fitzpatrick, whose op-ed on the passenger pigeon ran in The New York Times Aug. 29 as a preview of the State of the Birds report to be released Sept. 9, will present a lecture on the legacy of the passenger pigeon at 7:30 p.m. at Sapsucker Woods, Sept. 15; the lecture will be live-streamed on the Web.

“By 1900, the only thing left of passenger pigeons were rumors; they were gone,” with the exception of a few left in zoos, said Rohrbaugh. “The main culprit was market hunting; adults, eggs and squab were trucked by the trainload to the east to serve in restaurants,” he added.

Now, conservationists, including those at the Lab of Ornithology, call for remembering the lessons learned from lack of monitoring and regulations, and unbridled consumption. John Fitzpatrick, executive director of the lab, published an op-ed about the species’ extinction in The New York Times Aug. 29.

Throughout September, events and art exhibits at the lab will return to the theme of the passenger pigeon, as the bird’s demise offers a cautionary tale for other species.

“In only 40 years, people wiped out billions of birds,” Rohrbaugh said. “It’s an important lesson for commercial fishing. We think we will never get to the end of blue-fin tuna or cod, whereas it is entirely possible to bring a species to its knees in short order.”

Still, in the United States, incremental conservation efforts have worked in many cases, Rohrbaugh points out. Since the 1960s and the passage of new laws and efforts of such conservation organizations as Ducks Unlimited, wetland bird populations have steadily increased. Bald eagles, osprey and peregrine falcons have all rebounded from near extinction in the 1970s due to DDT, which has since been banned. Though poaching may threaten species and change the economic outlook for poor hunters in other parts of the world, hunters in this country are now “a cohesive and effective force in conservation,” Rohrbaugh said. 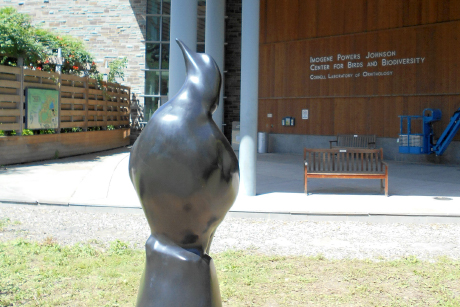 Pat Leonard
A sculpture of a passenger pigeon by former Cornell professor and current Lab artist-in-residence Todd McGrain, who is lending it to the lab for a year. The sculpture is part of McGrain's Lost Birds project featuring five extinct species.

Today, among the biggest threats is habitat loss due to industrial agriculture, which has led to declining populations of such grassland birds as eastern meadowlarks and grasshopper sparrows.

As people look forward, monitoring threats and the health of the environment is necessary, with such projects as eBird harnessing the vast power of citizen scientists to collect data on bird numbers and ranges.

The Cornell Lab is a participant in Project Passenger Pigeon, a consortium of nonprofits and educational institutions commemorating the 100th anniversary of the passenger pigeon’s extinction.