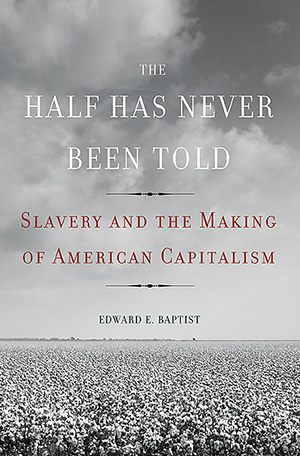 America became a global superpower in large part due to the wealth accumulated through slave labor from the 17th to the 19th century, Cornell historian Edward Baptist contends in his new book, “The Half Has Never Been Told: Slavery and the Making of American Capitalism” (Basic Books).

Baptist, an associate professor of history, reinterprets that violent era of American history through slave narratives, the statements of politicians, entrepreneurs and former slaves, newspaper accounts, plantation records and other sources.

The book details how the modern world was shaped by the expansion of slavery in the United States, from the writing of the Constitution in 1787 to the beginning of the Civil War in 1861. He covers the slave trades and forced migrations that drove the expansion, the systems of labor that emerged and the economic, political and cultural consequences of slavery for men, women and children.

“The other half of the story reveals how slavery moved and grew and changed over time,” Baptist writes. “Lorenzo Ivy’s time, and that of his parents and grandparents.”

“The half has never been told” is from a quote on slave trading from Lorenzo Ivy, an elderly African-American interviewed in 1937 by a young black student for the Works Progress Administration, as recounted by Baptist in the book’s introduction.

“The work done by enslaved African-Americans is the direct ancestor of the modern world of work experienced by the majority of people employed by today’s corporations and major institutions,” Baptist wrote recently in Publisher’s Weekly. “We like to think that the industrialization that lifted the Western world from rural backwardness to our contemporary consumer paradise was created by clever inventors, factory workers and captains of industry. But the transformations that made the modern world were also made in cotton fields.”

Baptist points out how increases in production by slaves working cotton plantations in the early 19th century were the result of what could be a modern management practice: Giving employees a productivity quota that was set higher each successive time it was met. The difference for the slaves was that those who didn’t meet their daily quota were whipped.

Baptist has taught courses on slavery, the South, the Civil War and more general 19th-century U.S. history. His research and writing includes work focusing on the history of the enslavement of African-Americans in the South. His other books include “Creating an Old South: Middle Florida’s Plantation Frontier Before the Civil War” (2002) and, as co-editor, “New Studies in the History of American Slavery” (2006).