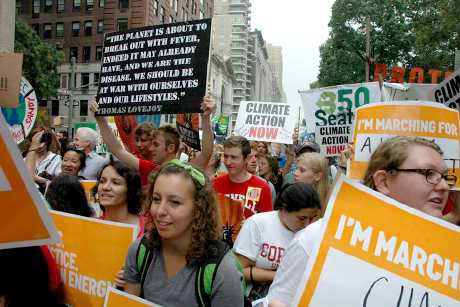 At 5:30 a.m. Sunday, Sept. 21, more than 130 Cornellians boarded buses with posters and optimism to join 400,000 individuals participating in the People’s Climate March in New York City.

The march drew individuals from all over the world who came together to call on international leaders to commit to combatting climate change at the Sept. 23 United Nations Climate Summit. There, “representatives will discuss climate policies for their home countries and a possible global agreement,” said Emma Johnston ’16, Student Assembly Environmental Task Force chair. “People gathered to advocate for stronger action by world leaders to mitigate the harmful impacts of anthropocentric climate change will have on people and the environment.”

The march was the largest climate march in history. Cole Norgaarden ’17, an organizer who recruited and mobilized Cornell students, said: “I think everyone there was surprised by the attendance. NYPD anticipated 40,000, but 400,000 actually showed up.”

Norgaarden continued: “The issue of climate change and climate injustice is inherently intertwined with worker’s rights, racial issues, mass incarceration, food justice and just about any social problem you can think of. Working in solidarity across these causes is imperative.”

Taryn Mattice, chaplain of Cornell’s Protestant Cooperative Ministry, organized the buses and participated in the march. “I read reports that there were more than 50,000 students,” she said. “It was one thing to know all this would happen, another to see it.”

Mattice said the group of Cornell students, faculty and family members “were utterly fantastic. Patient, gracious, committed to being there. And it was an eclectic bunch – many were long-time activists, some were experiencing their first protest march.”

Cornellians were on their feet for more than six hours. Due to the size of the crowd, the march often came to grinding halts. “There were so many people in the streets that it took close to an hour for those of us in the middle sections to even begin moving,” Norgaarden said.

Norgaarden said he led a contingent of the student section, whose energy was infectious: “Being able to march with them directly through Times Square was thrilling and probably the highlight of my experience.”

“The most striking aspect of the march was its central focus on environmental justice,” said Johnston. “Messages on people’s posters and the diversity of groups present spoke to this common theme, advocating for a more equitable distribution of resource wealth and restructuring our economies so that market externalities are not left to those with the least political clout to defend against them.”

The Cornell student organization KyotoNOW will continue its work on climate issues and fossil fuel divestment said Norgaarden. “As the semester progresses, we plan to continue our campaign for divestment, so keep on the lookout for action opportunities in the future.”

More photos of Cornellians at the March can be viewed at:https://www.facebook.com/CornellOceanography.